Yes, we too were unaware of this band until Craig announced he would feature their 1971 debut album, Lost in the Ozone, for this week’s Vinally Friday segment.

So who is Commander Cody, and what’s up with those Airmen? 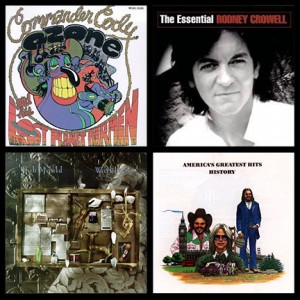 It turns out, they’re not only good – they’re about as influential as it gets when it comes to country rock. Think Asleep At the Wheel, but with a good dose of irreverence. And apparently (along with beer) the band offers one of the few examples of shared taste between rednecks and hippies.

Leave it up to Craig to bring both parties to the table.

Alanya will mix it up a little this week with various works from Rodney Crowell, who will close out the 11th annual River City Roots Festival on Saturday.

Crowell, who spent three years backing up Emmylou Harris, is a two-time Grammy winner. “After All This Time” won Best Country Song in 2000 and Old Yellow Moon won Best Americana Album in 2014.

Robert will again show us how cool he is with a few spins of Bob Mould’s debut solo album, Workbook.

Recorded in late 1988 and early 1989 when Mould holed himself up at a rural Minnesota farm following the breakup of punk outfit Husker Du, Workbook demonstrated a change in musical direction for Mould.

For some perspective, check out this “25-years-later” review from the A.V. Club.

And then Tommy will close us out with some classic folk rock (is that a thing?) from America’s greatest hits collection released in 1975.

By the way, if you didn’t know already, America is playing the Wilma and there are still a few tickets on sale!

Finally, it’s Friday! It’s Vinally Friday, only on the Trail 103.3. Thanks, as usual, to Pella Windows & Doors for sponsoring!