It’ll break you, or it’ll make you – tragedy’s kinda funny like that.

For the Allman Brothers Band, the loss of founding member, group leader and guitar legend Duane Allman in 1971 pushed them squarely into the latter category.

Sure, the Georgia rock outfit had already been launched into the commercial mainstream with their live album, At the Fillmore East, earlier that year. But when Duane died in a motorcycle accident just three months later, most critics wrote the band off as good as dead. 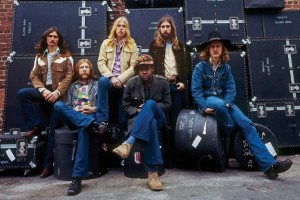 Instead, just a mere weeks after the tragedy, the group found their solace came not with moving on but with rocking on.

“It was as if each of the five had expanded some to fill the empty space, and a different kind of internal structure started to grow.”

Glover’s observation was recorded in the magazine’s official review for 1972’s Eat A Peach, the band’s third – and most successful – studio effort to date.

Later, at the end of his track-by-track analysis, he concludes: “The Allman Brothers are still the best goddamned band in the land …”

This week on Vinally Friday, Alanya will give you a taste of what Tony was talking about with a few spins of her favorite tracks off the legendary double-album.

Eat A Peach truly bridged the old Allman Brothers Band lineup with the new one.

Even the tracklisting splits that way – three recorded with Duane before his passing; three recorded afterwards; plus several “leftover” tracks from their Fillmore East shows.

-Robert will follow up with a random assortment of some 7-inch singles from his personal library.

The line-up includes The Beatles’ double A-sided single “Penny Lane/Strawberry Fields Forever”, as well as a little B-52s and some Elvis Costello.

Perhaps most notable (or strange) is a group called The Pink Parker and their cover of The Trammps’ “Hold Back the Night.” 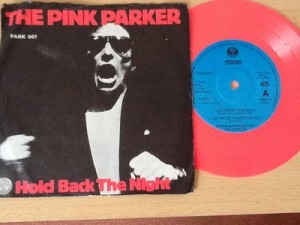 We had to do a little research to learn The Pink Parker is actually English singer-songwriter Graham Parker with backing band The Rumour.

Apparently the R&B singer heard 1975 original and decided to put his own spin on it – just two years later.

For more, check out this background story from British online newspaper, The Independent.

-Finally, Tommy will wrap up the day with some dance tunes from indie-pop foursome Saint Motel.

The Los Angeles-based band quickly built on their smash single “My Type” in 2015 with their second full-length album in 2016.

Titled saintmotelevision, the album is most recognizable for the charismatic single, “Move,” as well as several the highly contagious and artful 360-degree videos that were released in conjunction with the album.

In her review for AllMusic, critic Marcy Donelson described saintmotelevision as a “record of big, rousing choruses … (which) largely avoids feeling formulaic with the help of agile melodies, quirky arrangements and a tone that resists saccharinity.”