• It’s only been three months since Craig introduced the Grateful Dead‘s self-titled debut to the Trail turntable.

But considering there are no rules to this whole Vinally Friday thing, and considering we’re in the midst of an epic Dead & Company concert ticket giveaway – and, finally, considering that Craig has a brand new copy,  and we all know the excitement that can generate – he’s going to do it again. 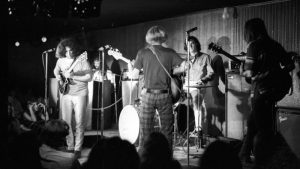 This time around, however, he’ll highlight a few different ones off the 1967 release.

If you missed it before, here’s what we said then. Believe it or not, three months later that all still holds true.

• Alanya will get us primed for next month’s Greensky Bluegrass show with music from their 2014 album, If Sorrows Swim, along with a ticket giveaway.

Coincidentally, this is another one that got the turntable treatment in March – but it was March of 2017, not 2018, that Alanya brought it in, as the Michigan-based bluegrass-country-rock outfit was gearing up for a show at the Wilma.

Greensky Bluegrass just announced a two-leg, nationwide fall tour along with Missoula’s own Lil Smokies – check out details for those shows HERE.

• Robert will feature the works of American multi-instrumentalist and record producer Todd Rundgren off his 12th studio release, Nearly Human.

Released in 1989, the album marked Rundgren’s first solo release in several years – and first-ever to feature his future wife, Michele Gray, as backup singer. It was the track “The Want of a Nail” featuring a different guest – soul legend Bobby Womack – that comprised the album’s only charting single, however.

Rundgren just wrapped up a 34-date U.S. tour with his former band, Utopia – their first here together in more than three decades. 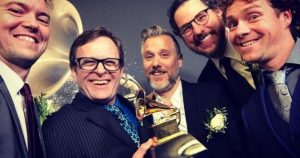 • Tommy will wrap up the day with the latest release from Brooklyn-based LCD Soundsystem, the Grammy Award-winning American Dream.

Released in 2017, the album marked a reunion of sorts for the dance-rock band, which had previously announced its disbandment in 2011. The album – their fourth – went on to become their first to reach No. 1 on the U.S. charts and though it didn’t win Best Alternative Music Album at the Grammy Awards this past January one of its singles, “Tonite,” took home the prize for Best Dance Recording.

The band will wrap up an extensive European tour next week with three shows in three nights at the Coliseum in Lisbon, Portugal.