Last weekend’s Sasquatch! may have marked the opening of the Pac Northwest’s summer music festival season, but Montana’s season won’t formally kick off until this coming weekend.

So for this week’s Vinally Friday, Craig and Alanya will celebrate by featuring records from a few of the artists we’re most excited to see perform. 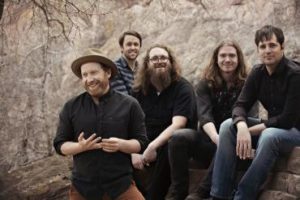 • Craig will kick off the day with Missoula’s own Lil Smokies and their latest release, 2017’s Changing Shades.

The album – their third – features a perfect blend of bluegrass roots with the country-rock influence for which the quintet has become celebrated nationwide. You can catch the Smokies 8-10 pm Saturday on the Main Stage – the perfect warmup for festival headliners Leftover Salmon!

• Alanya will follow up with another band well-known on the Missoula bluegrass scene: Fruition, and their 2016 breakthrough release Labor of Love.

It wasn’t but a year ago that the Portland-based group was performing right in the heart of downtown at the annual River City Roots Festival. If you caught that show, you know there’s a lot more to enjoy about these guys than just their music. Full of energy and fun, Fruition’s live performances are worth an entire festival ticket unto itself!

• Robert will take us back to 1979 with perhaps Elvis Costello‘s greatest album yet: Armed Forces. Touted as “more accessible” than Costello’s previous two works, Armed Forces was the first to officially credit his backing crew, the Attractions, and continues to make most reputable music critics’ greatest albums lists.

• And Tommy will wrap up the day with more music from a “dream pop” singer he’s featured previously on his New Show. She calls herself Hatchie and her five-track debut EP is titled Sleep.

The one you’ve heard before – the title track – has been described as “the kind of song that is best heard in a convertible speeding down a sunny highway, end credits rolling right behind.”