We owe Alanya a modest “mahalo.”

Thanks to her obscure selection for this week’s edition of Vinally Friday, we actually escaped the frigidity outside for a moment and actually warmed our toes to an pit fire on the beaches of Hawaii.

Okay, so maybe our imagination got a little carried away. But when a quick Google search brought literally zero background of any significance on her pick – a collection of holiday island tunes from a group called “Johnny Pineapple & His Orchestra” – we just had to dig a little deeper. 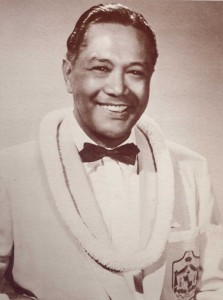 A half-hour later we finally found what we were looking for – and psychosomatic reflex or not, our toes were thawed in the process.

Turns out “Mr. Pineapple” was actually among the more celebrated of Hawaiian steel guitarists during an era when both pineapple (the fruit) was becoming an exciting new export and Hawaii (the place and the legend) was blossoming into the tourist destination it’s become today.

Like most new industries of the 21st Century, there was corporate string-pulling at work. Before the Dole Corporation became one of the largest international food conglomerates in the world, it was known as the Hawaiian Pineapple Company. The company experienced its first greatest growth spurt when another original Hawaiian agriculture group, Castle & Cooke, bought in during the early 1930s.

With Hawaii annexed as a U.S. territory, and thus import tariffs no longer in place, the company began to turn major profits selling its island fruits and vegetables to the mainland – and as part of its advertising scheme, the company also began to push the Hawaiian “lifestyle.”

Kaonohi was contracted to perform for a weekly radio show sponsored by the pineapple company, and so every Saturday evening beginning in 1939 his music was broadcast across the U.S. via CBS Radio. The show was called “Honolulu Bound,” and Kaonohi was nicknamed “Mr. Pineapple.”

Kaohohi would become the face of “Hawaiian Swing” during that decade, and did the same for “Hawaiian Calypso” in the 1950s. He was a staple both at New York’s Stork Club as well as the Polynesian Room of Chicago’s Edgewater Beach Hotel.

And where he played he brought with him a rotating cast of backing musicians – sometimes the “Honoluans,” sometimes his “Islanders.”

For the recording of this 1965 collection of Hawaiian “Christmas” songs – which ultimately became his most recognized contribution to the recording scene – it was simply his “Orchestra.”

Thank you, Alanya, for distracting us from this cold. Hopefully a few good spins from Hawaiian Holiday will keep us in that place through the long holiday weekend. 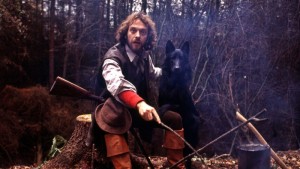 • Robert, filling in for Craig, will kick off the day with a remix of Jethro Tull‘s most celebrated album, 1977’s Songs From the Wood.

The band’s 10th studio release, Wood marked a transition away from traditional prog rock sounds into one inspired by the sounds and lore of old British countryside and folklore.

Earlier this year, English musician Steven Wilson put his spin on things and released a 40th anniversary remix of the classic album. This is what Robert will showcase.

• After an interlude into island holiday music, Tommy will bring us back stateside with Pick Your Poison, Pick Your Blues by New York-based power pop group Latvian Radio.

Released in November on the Swedish label Belpid Records, Pick Your Poison, Pick Your Blues marks the band’s sixth studio release and the opening of their second decade as a college radio mainstay.