The temptation to follow the Beatles into psychedelic pop-rock was powerful, indeed.

But somehow, someway, the Rolling Stones managed to make like Bob Dylan and find the strength to turn back from the abyss and culminate instead on the roots rock that made them unique and lovely unto themselves. The result, thank God, is the first album in a series that marks one of the most significant string of releases in all of rock history: 1968’s Beggar’s Banquet.

Opening with “Sympathy for the Devil,” the 10-track mostly acoustic blues release was the beginning of the band’s second – and likely most prominent – act. Fifty years later, it still ranks among their strongest release. 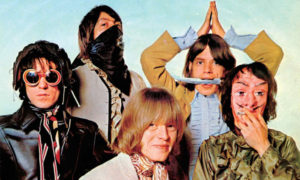 Last month, the Stones marked Beggar‘s golden anniversary with remastered releases on both CD and vinyl. Robert didn’t get a copy, but he’ll celebrate the anniversary nonetheless with a spin of his original version on this week’s Vinally Friday.

Also tomorrow on the Trail turntable:

• Craig will open the day with a more traditional take on the blues.

Albert King made his splash on Stax Records with inventive guitar stylings in the 1950s and 1960s, but after that label went bankrupt in 1975 he splintered off into something a little more pop and a little less authentic. The result was a series of commercial flops and, ultimately, a four-year hiatus from recording.

King wasn’t down for the count, though, and made his comeback on Fantasy Records with a live recording of a recent gig in San Francisco – a seven-track electric blues monster he titled San Francisco ’83.

• Speaking of the blues, the Allman Brothers were riding high off their breakthrough live record Fillmore East in 1972 when they began working on their third studio release, Eat A Peach.

The double-album, which would eventually be certified platinum, was not a fun project, however. After several band members broke for drug addiction treatment, lead guitarist Duane Allman would die in a motorcycle accident just a few tracks into the recording.

His brother, Gregg – as well as Dickey Betts, who took the lead on “Blue Sky” – would help the band continue on. The latter Allman died just last year; this Saturday we’ll mark what would have been his 71st birthday.

• Tommy will close out the day with the debut release from local group, Motorhome.

The album, Magnets, was recorded and produced at local indie label, House of Watts; it’s getting a limited edition vinyl LP release on Friday as well. Check it out and then go celebrate with the band – they’re one of four to hit the stage tonight at Free Cycles’ Youth Cycles Concert Series.