Shock appeal is as essential to great rock and roll as an amplifier is to a guitar:

It’s not really all that necessary, but it certainly makes things more fun.

It was out of this mantra that The Tubes took the world by storm in the 1970s – a theatrical group of (talented) misfits who spent as much time breaking venue, label and audience boundaries as they did actually putting chords and lyric together. 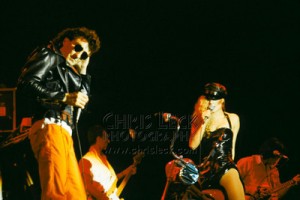 We could go on in depth about the band’s foundation and history, but it’s a story logged by plenty more talented and bloggers before us – so we encourage you to do your own research.

But let’s just say there was lots of drugs, costumes, blood and, yes, even prosthetic penises – not to mention venue blacklistings.

And that was just during first five years of the San Francisco band’s now 40-decades-long tenure.

After a series of charting albums and singles, the band found some semblance of humility and embarked on a serious effort at a concept album with legendary artist and producer Todd Rundgren pulling the strings.

The resulting concept album, which explores the concept of television addiction, wasn’t quite the hit they anticipated. In fact, it triggered their label to finally drop them. But in time became the most celebrated of their collection.

1979’s Remote Control, the band’s fifth official release, proved the Tubes “were more than a bunch of musical jokesters,” wrote AllMusic’s Donald A. Guarisco in his retrospective review. “The end result is the band’s finest hour and a treat for concept-album fanatics.” 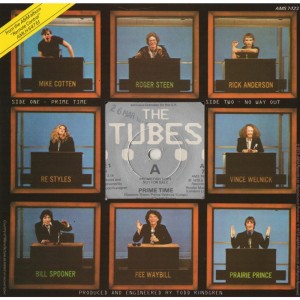 Tomorrow, Robert (who else?) will introduce us to his favorite tracks from Remote Control for this week’s edition of Vinally Friday.

• Craig previewed the Disc 1 of The Rolling Stones‘ second compilation of hits two weeks ago.

His intention was to move on to Disc 2 of More Hot Rocks (Bit Hits & Fazed Cookies) last Friday, but Tom Petty’s passing – as passings oft do – disrupted those plans.

So forbidding the loss of another great legend between now and tomorrow morning, Craig will finally get to it.

• Alanya will follow up with the only official “live” release from Minnesota bluegrass outfit, Trampled by Turtles.

Released in 2014, Live at First Avenue is a collection of 10 originals and one cover (The Pixies’ “Where Is My Mind?”) from the band’s 10th anniversary show at Minneapolis nightclub First Avenue a year prior. 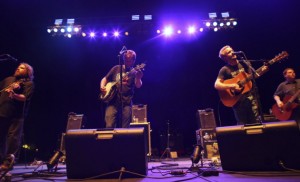 “Trampled by Turtles are well known among their fans for delivering a compelling live show, and Live at First Avenue captures the group on-stage, performing for an enthusiastic crowd at one of Minneapolis’ most prestigious rock venues,” wrote Mark Deming in his AllMusic review.

• And finally, John Lennon would have celebrated his 77th birthday earlier this week, so Tommy will celebrate with a few good spins of one of the legend’s seminal records, Revolver, which he recorded with The Beatles in 1966.

Known as the record that marked the band’s transition from traditional rock to the studio-confined, experimental sound that marked the second half of their tenure, Revolver features some of Lennon’s most celebrated songs: Tomorrow Never Knows, She Said She Said, I’m Only Sleeping.

The album also marked George Harrison’s official immersion into Eastern-influenced sounds, a direction that would mark consume the remainder of his career as both a Beatle and as a solo artist.