One of Missoula Montana’s most recognizable native sons Uncle Bill Stoianoff — he of the perpetual black beret, big grin and tasty gourmet sausages – is contemplating retirement.

His landmark shop The Joint Effort on Brooks Street is definitely closing. The building at 1918 Brooks in the Holiday Village Shopping Center will be torn down later this fall, and he’s no longer producing his sausages. He made his last batch (80 cases) of his ever-popular German Style Sauerkraut last week with the help of a fine crew from the Kicking Horse Job Corps in Ronan. The sauerkraut is about the only thing left in his inventory of gourmet goodness. 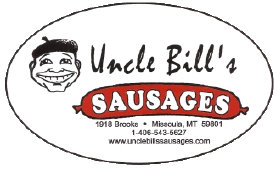 “Why am I doing this now?” he says. “I’m losing the building. People ask, “Do you want to do another one? Maybe. I don’t know, but I’ve been in it for 48 years. And I just lost a bunch of friends that I went to grade school with, and you don’t live forever.”

Uncle Bill is a favorite vendor on Saturdays at the Clark Fork Market. “I love doing it,” he says. And he will be there until the market closes on October 29th. He’s offering $20 off on the cases of sauerkraut. He’s taking 10 to the market and the others can be purchased at this price at the Brooks Street Store.

“But I’m down to some Mexican Chorizo and Honey-Smoked Salami with whole pistachios here in the shop and that won’t last long. The outlets in Missoula – the Orange Street Food Farm, the Fresh Markets (North & South) and Grizzly Grocery – all are stocked with a variety of my products,” he says, relating a story about a customer who just found four packages of his famous Andouille at the Orange Street Food Farm.

He also notes all the items in the Joint Effort, including his Uncle Bill’s House of Hot Sauce, we’ll also be sold soon, he hopes – before he locks the doors one last time on the blue-fronted shop on Brooks with its wooden toy soldier in front and Raggedy Ann & Andy dolls waving in the window. “It’ll be business right up until the end,” he says of that last Saturday in November.

“Forty-eight years ago, we started on Friday the 13th , says Uncle Bill of his first store, which became known for its toys and novelty items, in downtown Missoula. “And I’m closing on the 13th . Lucky for everyone.” As for his immediate future, “I’m going to live some life, visit with friends, see what happens next,” he says.

You can learn more about Uncle Bill on his website at www.unclebillssausages.com