Recorded on the veranda of a 130-year-old Victorian home adjacent to the salt marshes of southern Georgia, Mandela sits down with ornithologist and wildlife biologist Tim Keyes. 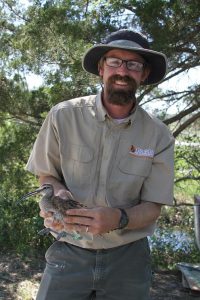 Currently employed by the state’s Department of Natural Resources, Tim’s primary focus is on coastal non-game birds. He elaborates with Mandela on the evolution of dinosaurs, the amazing physiological features of birds – some of which not only fly, but also swim – and even their eggs, including shapes and colors and why they differ from species to species.

Tim also keys us in on migration patterns, including how some birds area able to cross oceans in pursuit of previously unexplored destinations – often using celestial navigation and often without stopping along the way.

We’ll also learn from Tim about how climate change is playing a role in the lives and habits of our fine feathered friends.

Don’t miss this week’s episode of the Trail Less Traveled – Sundays at 6 pm on the Trail 103.3 and online at traillesstraveled.net!