He’s best known for his advanced kayaking expeditions, but that’s really just one peg on the long list of real-life works by Doug Ammons. 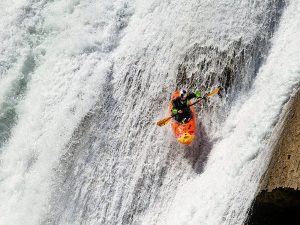 The Missoula resident, who holds degrees in mathematics and physics as well as post-graduate degrees in psychology from the University of Montana, is also a classical guitarist, black belt martial artist, philosopher, speaker, editor. Oh yeah, and did we mention he’s authored several historical books?

This week, Mandela sits down in the Trail studio with Doug to talk about his life works, including his book “Whitewater Philosophy” – named one of the “best outdoor adventure books” by the Wall Street Journal.

Doug grew up in the wilderness of Montana and developed his comfort in teh water from a very young age, paddling lakes and easy local rivers in folding kayaks. He became SCUBA certified at age 12, was a competitive swimmer both in high school and at UM and is now a world-class kayaker known for solo descents of Class 4 and 5 runs around the world.

In 2010, Outside named him one of the top 10 adventures of the century.

Don’t miss the first half of Mandela’s two-part interview with Doug this week on the Trail Less Traveled – that’s 6 pm on the Trail 103.3 and streaming at traillesstraveled.net!