Checking in from the outskirts of Yosemite National Park, Mandela delivers this week the first of a two-part series spotlighting who she describes as “the most professional river guide the world has ever seen.” 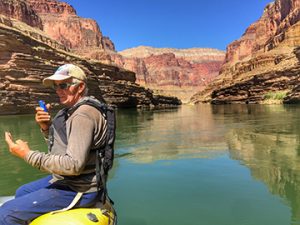 Recorded on the edge of the Colorado River at Pipe Springs, where the river is accessible only by watercraft or the popular Bright Angel Trail, Mandela visits with her mentor, Glenn Goodrich.

Having guided over 445 rivers since he began this work in 1977, Goodrich is a true living legend. And when he’s not working the rivers, he’s running them worldwide just for fun – with no plans to slow down.

Check out this recent feature on Glenn in Canoe & Kayak Magazine and then tune in for Mandela’s personal account – it’s the Trail Less Traveled, Sundays at 6 pm on the Trail 103.3 and at traillesstraveled.net.