Born to the son of the Italian Count of Santoponte during a car accident in 1928, Georges de Giorgia has never quite learned to stay put.

Here’s the shortlist of Georges’ experiences between that day and today, where he works at the Lewis and Clark Interpretive Center and Cascade Historial Society in Great Falls: 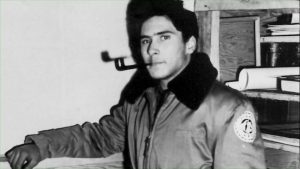 • He grew up working in his father’s wooden ship boatyard in Chile, where the family moved when Georges was four;

• He became the youngest person to spend a year in Antarctica after he joined an American expedition to the continent at age 17 – an experience commemorated by his namesake mountain there, de Girogio Mountain;

• He spent 30 years sailing the oceans, including time as navigator for famous English explorer H.W. Tilman and an episode hunting for Sir Franccis Drake’s lost treasure on Robinson Crusoe Island;

• He served as “Harbor Master” during the 1968 Olympics in Mexico, where he raised his children;

• He has counted Marlon Brando and Cliff Robinson among friends; actresses Stefanie Powers and Irene Papas among lovers; and, with a role in three films, is considered Chile’s first motion picture actor.

This week, the first of a two-part episode featuring the true “most interesting man in the world.”

Tune in to the Trail Less Traveled, Sunday night at 6 pm on the Trail 103.3 and at traillesstraveled.net!