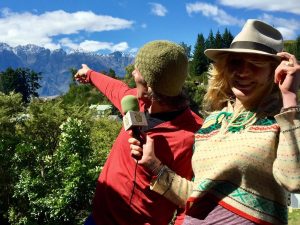 Born and raised on the United States’ eastern seaboard, Graney learned at a very young age there was a lot of fun to be had by seeking trouble in the wild. First, his treks took him climbing in the mountains nearby; later, he moved west and continued his quests in Arizona and Colorado. There, he met his tribe and the trouble piece faded as his passion for whitewater grew.

Now guiding kayaks is the means by which he’s taking his adventures to other parts of the world, including Central and South American and now, New Zealand.

That’s where Mandela caught up with him for this week’s episode of The Trail Less Traveled.

Tune in Sunday night at 6 pm for an interview with Graney under the southern Alps of New Zealand’s south island.

For more information on this weekly travel series, including an archive of episodes past, visit traillesstraveled.net.