This week on New Tracks On the Trail: • Since the Trump presidency kicked off an … interesting … new era, there’s been a lot of politically inspired music hitting the airwaves. Some of it hinges on themes of empowerment; some just screams of anger and disillusionment. But now, an unprecedented taste of bridge-building. “Make […] 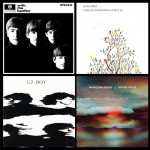 This week on New Tracks on the Trail, we’re plating up some seconds of albums we featured earlier this year, we’ve got a couple tracks from albums that dropped just last week and we’ll look ahead to some of of the more anticipated albums of early 2018! • Texas-based folk-rock siblings Maggie and Tyler Heath […]

Who knew Aristotle was a pop music critic? Yes, we’re talking about that Aristotle: the ancient Greek philosopher and scientist; The one who studied under Plato and tutored Alexander the Great; the one who shaped Western thought for centuries to come. The one who apparently issued the first honest critique of the inexplicable phenomenon known […]