It’s been quite the year for Lukas Nelson. In addition to touring as backing band for Neil Young – and both appearing in and writing for upcoming Bradley Cooper/Lady Gaga remake A Star is Born – Lukas, son of Willie, has also been working on a new album with the group he fronts, Promise of […] 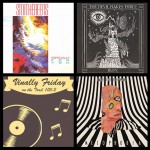 Critics tore into them for ripping off pop bands past. But it turns out the Smithereens were really ripping off pretty much the entire ’90s rock scene with their crunchy, mod-inspired soundtrack to the mid-1980s. The New Jersey rock band has unabashedly paid sonic tribute to their biggest influences – Buddy Holly, Elvis Costello, the […]