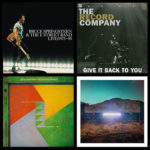 This week on the Trail turntable: • Craig will continue his month-long exploration of Bruce Springsteen‘s five-disc live box set, Live/1975-85. The set marked the first live album in a decade to top the charts after its release in 1986; ultimately it went platinum 13 times over. It remains the second best-selling live album in […]