Nothing puts political despair in perspective like a family crisis. Deep into the creation of her follow-up to 2014’s Unrepentant Geraldines, Tori Amos found her work thrown wildly off its trajectory with the election last fall of Donald Trump to the U.S. Presidency. Those who have followed the singer/songwriter over the course of her soon-to-be-15-album […] 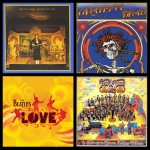