The Beatles had Abbey Road.

The Stones and, Queen and Bowie had Trident. The Stones also had Sunset Sound, as did the Beach Boys, Zeppelin and the Doors. Don’t forget the blues and soul rock that came out of Sun Studios, and of course the “Motown” sound that emanated from Hitsville, U.S.A.

But any list of the world’s most celebrated music studios would be incomplete without the inclusion of Alabama’s FAME and it’s close cousin, Muscle Shoals Sound Studio. Opened in 1959 and 1969, respectively, the two small-town, big-sound locales were the birthplace of some of southern rock and soul’s biggest hits – well known favorites from the likes of Bob Seeger, Allman Brothers, Lynyrd Skynyrd, Otis Redding and even Bob Dylan and the Stones.

The original Muscle Shoals Sound Studio ceased operations in 2007, and now it appears the long, storied history of its forebearer, FAME, may also be coming into question.

In January, on the precipice of FAME’s 60th anniversary, original founder and longtime manager Rick Hall passed away. The famed studio’s future is now in the hands of new owners, Rodney Hall (Rick’s son) and his partner, Keith Stegall. But if their latest focus is any indication, they’re as determined as anyone to ensure the studio remains solvent for the years to come.

The two recently founded a tribute album that could be a financial boon to an organization committed to preserving and restoring the historical studios of the tiny town.

Muscle Shoals Music Foundation is one of two organizations to receive a portion of proceeds from the new tribute album to FAME, Muscle Shoals… Small Town, Big Sound. The album, due out Friday, features 25 legendary artists on 16 different covers of classic tracks originally recorded at the studio. The other beneficiary will be the Grammy Foundation.

We’ll kick off this week’s edition of New Tracks on the Trail with one of our favorites from the new collection, Grace Potter’s cover of the Etta James song “I’d Rather Go Blind.”

The blues singer originally recorded the song in 1967 for her album Tell Mama. It appeared as the B-side of the single with the same name, a release later called “one of the great double-sided singles of the period.”

Potter said she was delighted to be invited to participate in the project, her allegiance to the studio and its storied history trailing back to her earliest years. 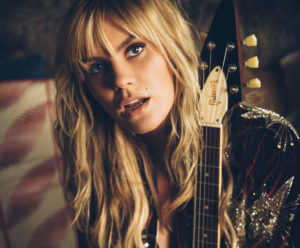 “At 15, I started collecting albums from Wilson Pickett, Etta James, Phoebe Snow, Clarence Carter, Aretha,” she told Billboard in a recent feature on the collection. “And it was only later, reading the fine print in the liner notes, that I realized almost all my favorite records had been recorded at Muscle Shoals. That’s clearly not a coincidence. That place is a vortex of soul.”

• Former Dire Straits frontman Mark Knopfler has finalized a new collection of originals with a target release date of Nov. 16.

Down the Road Wherever is 14 tracks deep and was produced with the help of his old bandmate Guy Fletcher. The album will mark the singer/songwriter’s ninth solo album.

Knopfler has mostly been in the news lately for things he’s not done. In addition to no new music since 2015’s Tracker, he was a no-show at his former band’s induction into the Rock and Roll Hall of Fame in August.

• In what basically amounts to a cover of a cover, The Band of Heathens have found a way to give their own voice to the well known song “Take Me Home, Country Road.”

Sure, the track was made famous by John Denver in 1971. But it’s Ray Charles’ version from a year later that the Austin, Texas, band is channeling – part of the band’s reworking of the gospel legend’s 1972 album, A Message From the People, which dropped Sept. 14.

“The song is ubiquitous, so we wanted to make sure we could impart some of our style on the recording,” singer-guitarist Ed Jurdi recently told Taste of Country. “We combined some of the acoustic elements and vocal harmonies of the original John Denver version with some of Ray Charles’ R&B and soul touches.”

The track-by-track cover album – the band’s first since 2016’s Duende – pays tribute not only to Charles’ music, but to his message of social justice and a more unified America, Jurdi said.

And it couldn’t be more timely – Charles would have celebrated his 88th birthday on Sunday.

• Speaking of Austin, psychedelic rockers The Bright Lights Social Hour haven’t released a full-length since Space Is Still the Place in 2015.

But they’ve been anything but idle, dropping the Neighbors EP in 2016 and penning the theme to the Amazon Video series “Sneaky Pete” the year after. And now they’re back with another EP.

Missing Something, due Friday, was self-recorded and self-produced by the band at their Lake Travis studio, Escondido Sound. The band brought in keyboardist Edward Brailiff to contribute both synthesizer and guitar work, and Spoon drummer Jim Eno for production help.

It deals with themes of mental health and death; according to a band press release it’s five tracks were influenced by the death of band member Jackie O’Brien’s brother, Alex, who also worked as the band’s longtime manager.

• Seattle singer/songwriter Noah Gundersen‘s latest album, WHITE NOISE, actually dropped back in 2017. But some of it’s just now making its way to radio circles, including this new single that’s a perfect fit for the Trail.

WHITE NOISE, the indie musician’s third solo album, was described as “one of the best albums of 2017” by Seattle Times critic Owen R. Wilson. The effort marked a “massive step forward in volume and production” for the artist, remarked Westword’s Andy Thomas.

Gundersen,who also founded the band The Courage, has announced he’s working already working on his next full-length album due for release in 2019.

• The Kinks have been hinting all year at a possible reunion album, but in the meantime they’ve hit us off with a re-release of one of their most celebrated records.

Fifty years after it’s original release in 1968, the anniversary edition of The Kinks Are The Village Green Preservation Society features several unreleased and re-worked tracks on both its standard and deluxe editions. The first single is one of the former, a track only previously heard by the public once – at a live performance in 1973.

In other Kinks news, founding member Dave Davies has announced he will release in October a new collection of unreleased songs recorded in the 1970s. The album will be titled Decade, and Davies will promote it with a tour sometime in 2019.

• And last but not least, we were finalizing our list of New Tracks for the week when we received word that Mumford &  Sons had announced a new album set for release Nov. 16.

Delta, which marks the British band’s fourth, will be “wildly experimental,” according to reports, with blend of their trademark acoustic sounds and something along the lines of electronica and hip hop.

Yep, you read that correct. And the has enlisted mega-producer Paul Epworth (Adele, Florence and the Machine, Coldplay) to help craft it.

We’ve got the album’s first single, and we can’t wait to share it. And be on the listen-out for a Mumford show near year – apparently they’re working out details of a 60-date world event.