Politics aside, the latest project from writer Dave Eggers has been fantastic for music lovers.

30 Days, 30 Songs – which features a new song or video release every day for the 30 days leading up to Election Day – has inspired new creative projects from bands like Death Cab for Cutie and Cold War Kids, who might otherwise hold onto their work until they’ve got a full album’s worth of material ready. 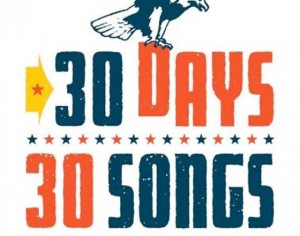 The spin, however, is that each release is decidedly anti-Trump, with all proceeds raised going to the Center for Popular Democracy and their efforts towards universal voter registration.

Tomorrow for New Tracks on the Trail, we’ll spin the Day 8 selection – EL VY’s “Are These My Jets”.

EL VY is a side project featuring both Matt Berninger of the National and Brent Knopf of Ramona Falls and Menomena. They released their debut album, Return to the Moon, last year but have kept mostly quiet since.

According to Berninger, the new song is about “walrus penis jewelry.” Check out the associated online video game HERE.

-Shook Twins: The new single from the Portland, Oregon-based indie-folk duo who famously turned down American Idol in 2014. Described as “quirky folk”, Shook Twins will perform at The Top Hat later this month. Tickets are still available HERE.

-Amos Lee: Another one from the American singer-songwriter’s sixth studio album, Spirit. Released in August, Lee called the album a “bit of a tribute” to Blue Note Records president and CEO Bruce Lundvall.

Check out the video to the first single, “Vaporize,” HERE. 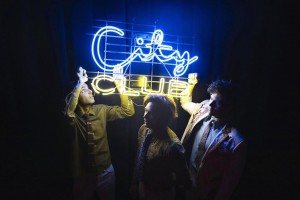 Strokes singer Julian Casablancas called the Growlers “the most interesting band in the world, certainly one of the coolest,” and then backed up his endorsement by producing the first single off the new album. Check out the video for “I’ll Be Around” HERE.

-The Rolling Stones: A few tracks from the rock legends’ 25th studio album, Blue & Lonesome. Due in early December, the band described the album of blues covers as “five days in the making and just three days to record.” It’s the band’s first release since 2005 and features Eric Clapton on two tracks.

There ya have it – another round of New Tracks on the Trail! Thanks as usual to Rockin’ Rudy’s for sponsoring!