The funny thing about classic rock is that it can only be labeled such in retrospect.

So despite our initial groans at Variety’s naming The War on Drugs as the band best positioned to assume the title of “best American arena classic-rock band” from Tom Petty and the Heartbreakers – within a few short hours of reflection we realized this was a truly un-falsafiable claim.

Not only is there no way to predict who will fill Petty’s giant footsteps, if anyone at all, but we’re pretty sure we won’t know it until years (decades?) after it’s happened. 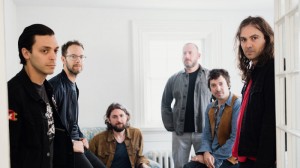 Petty certainly wasn’t crowned King of Classic Rock when he burst onto the scene in the mid-1970s. In fact, he may not have consciously been labeled as such until his passing last week.

So, is The War On Drugs a reasonable replacement?

Rolling Stone gave the idea some credence in their postmortem the day after Petty’s death, naming the Philly indie rockers first in their shortlist of Petty disciples.

Billboard did the same, naming TWOD, specifically, along with  “nearly every country or alt-country band” as having been influenced by his work.

The comparisons continue: NME, Las Vegas Weekly … surely so many publications can’t all be wrong?

So perhaps if The War On Drugs is to inherit the classic rock throne, then its only appropriate that the coronation occur at a time when the six-piece is at its most relevant.

Finally a household name a dozen years after its founding by frontman Adam Granduciel and the long-ago departed Kurt Vile, The War On Drugs’s latest single, “Holding On,” has received prominent airplay on the Trail 103.3 since its release earlier this year.

Starting Tuesday, we’ll introduce single No. 2 to the Trail airwaves as part of this week’s rendition of New Tracks on the Trail.

“There were hints of wide-screen ambition on The War on Drugs’ previous album, Lost in the Dream, which came out in 2014,” wrote NPR’s Tom Moon in his September review of the new collection. “Its sound was big — wild and abrasive, with hints of tenderness lurking underneath. A Deeper Understanding nudges those elements to the forefront.”

Check out band’s recent tribute to Tom Petty below, and then tune in all day tomorrow for the Trail premiere of the new song.

• Tommy introduced us to Broken Social Scene‘s new album with a Vinally Friday spin earlier this fall; now we’ve culled our favorite track and will throw it into regular rotation.

The album, Hug of Thunder, marked the Toronto rock collective’s fifth overall when it dropped in July – and first in seven years.

And remarkably, all 15 of its founding members reunited for the project, spurned in part by the horror of last year’s terrorist attacks in Paris.

Check out the Pitchfork review and more album background HERE.

• If you’ve enjoyed Missoula’s live music scene for more than a couple years then surely you’ve caught indie folk rock act Blitzen Trapper during one of their countless appearances at The Top Hat.

With their ninth studio release set for Nov. 3, the Portland band is all but certain to visit us again in the near future. 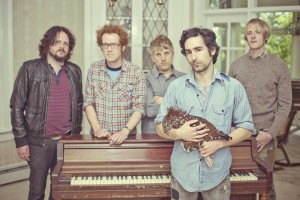 Titled Wild and Reckless, the collection includes seven from the band’s musical/rock opera that showed for 28 dates earlier this year at the Portland Center Stage.

• Speaking of The War on Drugs, one of their associated acts is looking to carve their own path with a new album and North American headlining tour.

Though the Barr Brothers are built around a foundation of two American brothers, Andrew and Brad, the four-piece is based in Montreal, Quebec, and – having twice been nominated for “Album of the Year” at the JUNO Awards – have fully been accepted fully by our northern neighbors.

The folk outfit is making their third go at it with Queen of the Breakers, ue Oct. 13.

“The music of The Barr Brothers has an expansive sound where influences intersect, and the members are equally at home playing jazz fests, folk fests and rock fests,” wrote NPR’s Bruce Warren in his introduction to the album’s title track in September. “They are super crafty songwriters and performers — sophisticated, but not overly — and their songs have plenty of familiar touchpoints, while still taking musical chances to a warm and dazzling effect.”

• Finally, leave it to Tommy to introduce us all to an electronic/instrumental London-based art rock trio comprised of men with silly names.

The quirky trio dropped their third studio album in July, and – like their previous two – it’s a concept album built on historical recordings. This go-round the theme is the rise and collapse of coal mining in Wales.

Tommy introduced us to the band previous on his New Show; now we’ll throw the track into our regular line-up.