Local history buffs won’t want to miss out on a special film screening happening later this week at The Roxy Theater. 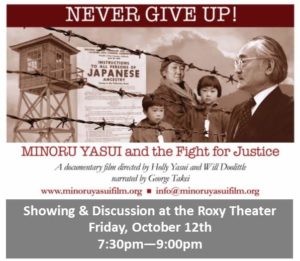 Yes, most of the story about Japanese-American attorney Mioru Yasui takes place in his home state of Oregon – but there are some significant Missoula connections that help bring to light some lesser known stories about the treatment of Japanese immigrants here during World War II.

Yasui’s father, Masuo Yasui, was among several thousand mostly Japanese and Italian citizens interned at Fort Missoula during the war effort – some of them held long-term and others for shorter periods as the US Department of Justice attempted to verify their loyalty to their new homeland.

Masuo Yasui was among the latter, and his son – who was present for the loyalty hearing in Missoula – initiated the first legal test challenging the forced incarceration of Japanese immigrants and citizens at Fort Missoula and elsewhere. But it was hardly an easy journey: He spent nine months in solitary confinement just waiting for the US Supreme Court to take up the case!

Now the story of Minoru Yasui, who was posthumously awarded the Presidential Medal of Freedom in 2015, has been documented on the big screen.

“Never Give Up: Minoru Yasui and the Fight for Justice” documents his family’s experiences during the war, his now famous legal battle, and a summary of his later years defending human and civil rights and his leadership role in the Japanese-American Redress movement.

The film is set to show 7:30 pm this Friday at the Roxy. Tickets are $4, or free for students as well as members of the Friends of the Historical Museum at Fort Missoula.

The film’s director – Yasui’s youngest daughter, Holly – will be present for a post-film discussion, so be sure to stick around to learn more about this incredible story! For more information, check out the Roxy’s event page on Facebook.

To learn more about the World War II internment at Fort Missoula, including a tour of the restored courtroom where Yasui’s “loyalty hearing” was held, check out the museum’s website or call (406) 258-3473.