Yeah, yeah – we’ve heard it before: Missoula traffic is so bad.

But coming from a guy who just spent nearly three weeks in California, I have to say that a slight slowdown during rush hour on a single major thru-way (I’m looking at you, North Reserve) is really laughable. Seriously – there is someone in SoCal right now who has been sitting in traffic for an hour and hasn’t driven more than a few miles. 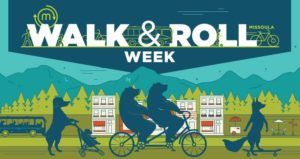 But what makes navigating Missoula so cool isn’t the lack of traffic in comparisons to the major metro areas – it’s the amazing access to alternative forms of transportation. From a zero-fare city bus system to a series of bike paths that crisscross town, you can pretty much get anywhere you need to go without ever needing your car. Save that guy for those epic trips to the mountains and rivers, right?

This week our friends at Missoula In Motion are helping put all our traffic woes into perspective with a celebration of all these great alternative transportation resources in Missoula.

Now in it’s 27th year, “Walk & Roll” kicked off Sunday by shutting down Higgins Street from the Hip Strip through downtown for a full-on party in the streets. We witnessed yoga, karate and a wicked cornhole competition – and that was just during a single bike ride across the bridge!

Events are continuing to roll out through the week, including One Less Car Day on Wednesday, a women’s bicycle maintenance workshop on Thursday, free coffee and donuts for bikers and walkers under the Madison Street Bridge early Friday, and culminating in a Climate Ride hosted by Free Cycles on Saturday.

But new this year, Missoula In Motion has partnered with some of the city’s coolest local businesses to offer up incentives for folks to ditch the car. Sign up for an account and they’ll shoot you over an email with a long list of digital coupons, including discounts on coffee, baked goods, gift items and full meals! I biked downtown Sunday to enjoy a buy-one, get-one free meal at El Cazador and then swung by Clyde Coffee afterwards for a free coffee!

So whether it’s for altruistic reasons or selfish ones (free cookies, anyone?) this is a great week to just leave the car at home and try on your bike or walking shoes for size. Hey, even carpooling does the trick – and definitely don’t forget about the bus – check out Mountain Line’s full list of schedule and maps here.

Hopefully we see you on the trails!