This year’s summer concert season officially kicks off in the spring.

We’re talking about the Sasquatch! Music Festival, which opens less than a month from today just down the highway at the Gorge Amphitheatre in George, Washington.

This year’s line-up is as good as any, with Bon Iver, Modest Mouse and The National each headlining one of the festival’s three nights. And there are plenty of other Trail artists on the slate: David Byrne, Spoon, Neko Case and Shakey Graves, just to name a few. 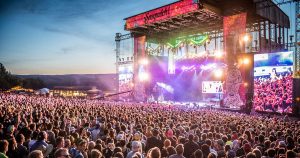 We’ve gotten into the habit of helping listeners get to the festival each of the past few years, but this year we’re going above and beyond with a THIRD round of giveaways starting today!

This time, though, it’s not the roar of the Sasquatch you should be heeding. Instead, we’re going to play a game called “Word of the Day.”

So how do you play?

First, you gotta sign up for the new Trail 103.3. weekly newsletter. When it arrives in your inbox, read through it and you’ll find a list of the daily code words. And then each day, several times throughout the day, our on-air guys and gals will give you a prompt. When they do so, you’ll text that word to 406-640-4103.

But what if you’re already signed up for the newsletter? Then you’ll find the code words in your most recent Sunday edition. Bam. Simple, right?

It’s a win-win deal – not only do you have access to our final rounds of Sasquatch! giveaways, but you’re also automatically plugged into all the amazing things we have going on at the Trail – and trust us, with this summer’s live music schedule there’s A LOT of amazing contests and giveaways to come!

We’ll collect entries every weekday through May 11th and then Craig will draw names and give away not one but TWO PAIRS that morning. And then all you gotta worry about is who you’re taking and how many hula hoops you need to bring …

Best of luck to you all, and thanks as always for keeping it local with the Trail 103.3!