Perhaps its a side effect of deep summer, or maybe it’s that half the town is on vacation.

Either way, with their dance-able beats and foundations of funk and rhythm,  this week’s selections for Vinally Friday certainly seem to hit on a theme: 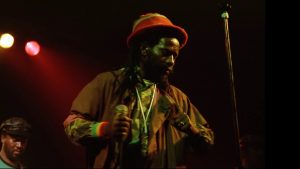 • Alanya will hit us off with a compilation of roots reggae from 1983.

The Heartbeat Reggae label was just a few years into its rapid absorption of most the biggest stars of the time, and the release of this self-titled disc is indicative of their success. Among the 10 different featured artists and groups are Burning Spear, Lee “Scratch” Perry, Sugar Minott and Mutabaruka.

In his AllMusic review, critic Rick Anderson praised the compilation for both its “qualitative depth” and “stylistic breadth” – ranging from social commentary tracks to dancehall party-time hits and back again.

“Every track’s a gem,” Anderson wrote. “And each one will lead you on a different path into Heartbreat’s very impressive catalog.”

• They were white, but they were on course to re-create early 1980s funk more than any of their black counterparts.

And perhaps no other time were Talking Heads more successful in their attack than with 1983’s Speaking In Tongues.

You know the album – their fifth – as the one with their only Top 10 hit, “Burning Down the House,” but this week Robert will take us deeper into what has become a true rock classic.

Nick Mitchell, critic for Clash, attributes the record’s enormous power to three key elements: The band had come off a hiatus where they learned they didn’t absolutely need each other to create music; longtime producer Brian Eno had been kicked to the curb; and an important new influence, the interracial “Expanded Heads” group, was proving a worthy investment.