Move over, winter, because Missoula’s summer concert slate is really heating up … 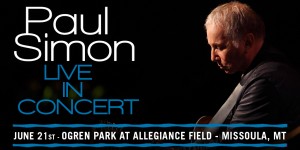 Presented by C Moore Live, the Missoula Osprey and Trail 103.3, Simon will play under the stars just days after headlining the Eaux Claires Festival in Wisconsin.

Highlights of Simon’s eclectic 50-plus-year career include three No. 1 singles as one-half of the duo Simon & Garfunkel in the 1960s, a solo career that includes 13 popular studio releases, 16 Grammy Award wins – including three for Album of the Year – and a Lifetime Achievement Award.

Simon was inducted into the Rock and Roll Hall of Fame in 2001.

Cost is $55 plus fees. Tickets are general admission only.

Stay tuned to the Trail and follow our Facebook page to stay on top of show details as they continue to be released!