Somewhere between the death of Ziggy Stardust and the birth of The Thin White Duke lies one of David Bowie’s more misunderstood albums.

Yeah, so the Ziggy persona wasn’t really entirely absent from the English rocker’s eighth studio release, 1974’s Diamond Dogs. But it was clear glam rock was, and with the first album in five years without backing band The Spiders from Mars, Dogs was a notable departure from where Bowie had seemingly been headed since he first broke through in the late 1960s. 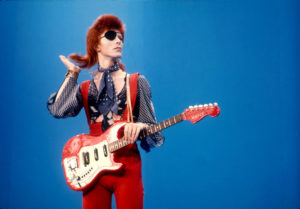 With it’s embrace of funk and soul, plus rock opera – even Broadway – Dogs “stomped on whatever good vibes remained in British rock and cleared the

stage for punk and goth,” wrote Pitchfork’s Barry Walters in a retrospective review after Bowie’s death in 2016.

The 11-track collection also marked Bowie’s commercial breakthrough in the U.S., where it shot to No. 5 – thanks mostly to its first single, the still very familiar “Rebel Rebel”.

This week for Vinally Friday, Alanya pays tribute to Bowie with a few spins of an album that, in hindsight, demonstrates perhaps more about the artist’s musical mastery than any other before or sense.

• Craig will kick off the day with what kind of feels like the opposite of David Bowie – Texas blues rock and rockabilly outfit the Fabulous Thunderbirds and their fifth studio album, Tuff Enuff.

Released in 1986, Tuff is most known for its title track – a classic rock mainstay that got some serious mid-decade airplay thanks to its inclusion on both the “Gung Ho” and “Tough Guys” soundtracks. It remains the band’s sole track to crack the Top 40, peaking at 10.

The commercial success couldn’t have come at a better time for the group, who were desperately seeking a label after several flops – and line-up changes – since they debuted in 1974.

Tuff Enuff was their first on the Epic/Associated label, and only to go platinum. And though it would mark the last with co-founding member Jimmie Vaughan – brother of Stevie Ray – it set the stage for several subsequent years of relevancy. In fact, that radio hit might have been just enough to maintain relevancy for decades, as some variation or another of the Fabulous Thunderbirds continues to record and perform to this day.

• Unlike its predecessor, Darkness on the Edge of Town didn’t produce any hit singles – and it certainly wasn’t as radio friendly.

But that didn’t stop the 1978 album from taking over the charts for nearly two straight years and going platinum three times over. 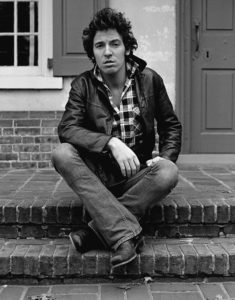 After three years of legal wranglings with his former producer, Springsteen was finally cleared to re-enter the studio in late 1977. The result was 70 songs, 52 of which were recorded at least partially and only 10 of which would make the final cut. The others became hits for other artists – most notably, Patti Smith’s “Because the Night” – or found their way onto future Springsteen records.

Of the 10 that made it onto Darkness, only one cracked the charts: “Prove It All Night,” which peaked at #33 on the US Billboard Pop Singles. Despite this, the album has become a favorite among Springsteen fans, later ranking 151st on Rolling Stone’s 2003 list of the 500 Greatest Albums of All Time.

The Boss is currently 10 months into his Broadway residency, but with that set to expire in December there’s been rumors of another studio release in the near future. Springsteen hinted at a solo record during an interview last November, and members of the E Street band have been spotted with producer Ron Aniello at Bruce’s studio as recently as this month.

• A little over two years after Tommy first introduced the Black Keys‘ third studio release to the Trail turntable, he’s doing an encore.

The album, titled Rubber Factory, is most notable for being the first album to crack the Billboard 200 for the Ohio-based rock/blues duo. Interestingly, it charted again – and slightly higher – after the breakthrough success of the group’s 2011 album, El Camino.

Rubber is named after the location of its actual recording – an old, abandoned Goodyear factory in the band’s hometown of Akron. They rented out the second floor there and, using a mixing console drummer Patrick Carney bought on eBay, spent five salty months trying to capture the rough sound of their live act. Despite the unusual circumstances and crappy equipment, they managed to do just that – or at least so says music critic Stephen Thomas Erlewine, who in his AllMusic review named the album “the most exciting and best rock & roll record of 2004.”

“Even if the Black Keys have more legit blues credentials than any of their peers, they’re nevertheless an indie rock band raised with not just a knowledge of classic rock, but with excellent taste and, most importantly, an instinct for what makes great rock & roll.”