Both Tommy and Craig are enjoying well deserved breaks in the sunshine this week.

And so Alanya and Robert will combine forces for a full-day turntable celebration of Carlos Santana‘s 71st birthday! 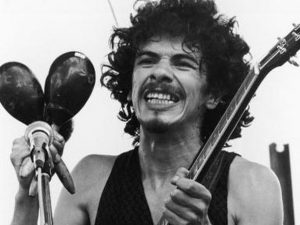 Santana was born in Jalisco, Mexico, on July 20, 1947 and learned to play music at a very young age thanks to the guidance of his father, a mariachi musician.

After honing his rock chops along the “Tijuana Strip” on the Mexico/U.S. borer, Santana made his way to San Francisco where in 1966 he was invited to join a melange of local musicians for a performance at the Fillmore West when previously scheduled guest Paul Butterfield was deemed too intoxicated to take the stage.

His band was signed to Columbia later that year and, with their original blend of Latin-influenced rock, jazz, and blues became a hit on the local club circuit. Fillmore owner Bill Graham arranged for the group to play at the Woodstock Music and Art Festival, where their legendary performance cemented their place in rock history.

Santana, the band, has released 23 albums, with Santana, the man, adding another seven solo releases. Together they’re also responsible for a long list of live albums, compilations and collaborations over the course of the past 50 years.

Carlos Santana has won 10 Grammy Awards and three Latin Grammy Awards. He is No. 20 on Rolling Stone’s list of the 100 Greatest Guitarists of All Time. The band was inducted into the Rock and Roll Hall of Fame in 1998.

Enjoy a selection of tunes from throughout the Latin musician’s rich and storied career.