Don’t get it wrong – Craig’s not an old hippie.

He’s still middle-aged at the very least. And, of course, his hair is too short.

But when it comes to his musical selections, we could forgive you for being mistaken. After all, this is the same guy who lit up the Trail turntable with some Commander Cody and His Lost Planet Airmen last summer …

This week, he’ll keep mystery alive with a few spins of not one but TWO classic Grateful Dead albums. 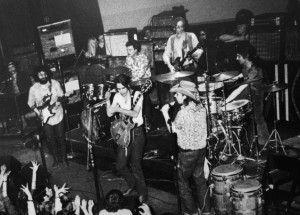 First up is History of Grateful Dead, Volume One – better known to fans as “Bear’s Choice” – “Bear” being the nickname of the band’s longtime sound man, Owsley Stanley.

Stanley compiled the live recording as a tribute to the band’s founding keyboardist, Ron “Pigpen” McKernan, who died during production. The album, released in 1973, highlights a set of the band’s performances from 1970 at the Fillmore East in New York City.

The first side is an acoustic collection featuring mostly country blues and folk covers; the second side is comprised of two electric blues covers of Howlin’ Wolf and Otis Redding.

It was originally intended to be the first in a series, but a follow-up never arrived.

Now considered one of the band’s more legendary contributions – especially for its introduction of the Dead’s “Dancing Bears” on the rear cover – “Bear’s Choice” didn’t garner much support from critics upon initial release.

“Not worth the whole four bills that Bear’s Choice lists for, but it’s a solid 89 (cents) worth, at least,” wrote Rolling Stone’s Stephen Davis. “Volume Two should be better.”

Craig will follow up with selections from the band’s first compilation album, Skeletons from the Closet: The Best of Grateful Dead.

Released by Warner Bros. Records in 1974, Skeletons has been certified platinum in the U.S. and stands as the band’s best-selling album of all time.

The track list includes tracks from six of the band’s nine albums to that point, plus one from Bob Weir’s solo album, Ace. You’ll probably know most – if not all – of the tunes.

Robert is visiting mom and dad in St. Louis for the long weekend, and Tommy is headed over the Sasquatch! Festival – so that leaves only Alanya’s contribution for this week’s Vinally Friday lineup. 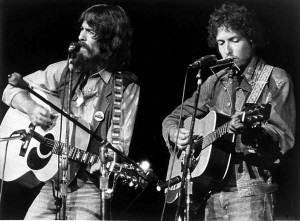 She’s chosen to highlight her favorite tracks from Concert for Bangladesh, a live triple album featuring music from the benefit concerts of the same name.

Organized by George Harrison, the concerts themselves were the first of their kind – an all-star cast coming together to raise money to aid the homeless refugees of the Bangladesh Liberation War.

Harrison was joined at the shows – as well as on the album – by former Beatles’ bandmate Ringo Starr as well as Bob Dylan, Ravi Shankar, Ali Akbar Khan, Billy Preston, Leon Russell and Eric Clapton.

The concerts marked Dylan’s first appearance on a U.S. stage in five years; the album won a Grammy Award for album of the year.

For more, check out this awesome retrospective on the event from ultimateclassicrock.com.