This week he’ll continue that effort with a few tracks off Disc 2 of the band’s extensive 1976 chronology, Dirt, Silver and Gold.

Sides C and D feature select tracks stretching from 1972’s All the Good Times through 1975’s Symphonion Dream (that’s studio albums six through nine). It also encompasses the 1972 collaborative album, Will the Circle Be Unbroken – the introduction to a trilogy that would continue into 2002. 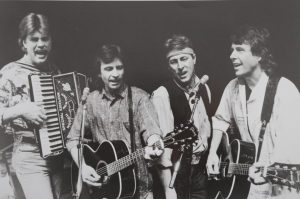 The era was significant for Nitty Gritty because it marked a re-posturing of sorts. After attracting attention with their first few releases in the mid-1960s, they moved into a more electric sound and released a series of commercial flops.

Instead of holding their ground, the band found some humility – hiring a new producer, renegotiating their contract and reverting to a more traditional country and bluegrass sound. The result? A hit song, finally, in “Mr. Bojangles” – and then the series of albums listed above.

And with Will the Circle Be Unbroken – recorded in Nashville with country stalwarts like Roy Acuff, Earl Scruggs and Doc Watson – Nitty Gritty Dirt Band earned their first Grammy Award nominations.

Hot Dawg references not only the nickname – “Dawg” – assigned the legendary mandolinist by Grateful Dead frontman Jerry Garcia; it also references the genre of music – “Dawg Music” – which Grisman made famous.

Built on a foundation of traditional stringed bluegrass, what separates “Dawg Music” from the rest is the jazz influences – particularly the French stylings of Stehpane Grappelli and Django Reinhardt.

In fact, the two both make appearances on Hot Dawg, which by the way marked Grisman’s fourth of 51 total releases as a leader or co-leader – the latest being last year’s Tommy Emmanuel collaboration, Pickin.

• Last summer, Robert took us across the pond for the British answer to Bob Dylan with a few tracks off Graham Parker and the Rumour‘s second studio release, Heat Treatment.

Despite being called the “most anticipated rock record since (Bruce Springsteen’s) Born to Run“, the album fell short of most critics expectations. But it wasn’t the songwriting or the performances that proved discouraging – it was the production and sound. 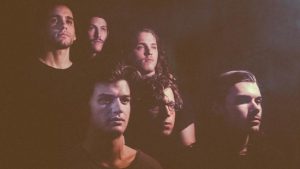 Parker later explained: The original recording of Stick To Me was lost after the masters were damaged before it was mixed; the sessions you’re hearing on this cut were patched together without in less than a week’s time.

Despite the presentation, Stick To Me marked the first time Parker and crew cracked the UK charts (#35) – a trend that would continue through their next four releases.

• Last week he featured their lead-off single on “The New Show” – this week, Tommy delves a little deeper into the debut from Chicago rockers Post Animal.

The six-piece gained early media attention because of the contributions from “Stranger Things” star Joe Keery on guitar. But they’ve moved beyond and now, with When I Think of You In A Castle, they’re garnering acclaim simply for being, well, good.

Post Animal best asserts its classic rock mettle on Castle via the risks of diverse arrangements and song structure, explained critic Rhian Daly in her review for NME.

“As a whole, When I Think Of You In A Castle is very much the opposite of calm,” Daly wrote. “It’s a record that thrives on exploring as much territory and as many ideas as possible – often in the same song.”

Check out a track-by-track breakdown of the album and a full list of spring/summer tour dates HERE.