The key to longevity in rock and roll is adaptability.

Or maybe it’s grit. Or luck.

But for this column’s sake, we’re going to go with our original thought – adaptability. Because that’s exactly what helped Fleetwood Mac transform from a fringe jazz/blues outfit in the saturated ’60s to one of the most well known bands in rock history. Craig’s selection for this week’s Vinally Friday is one of the many pieces of evidence that show why. 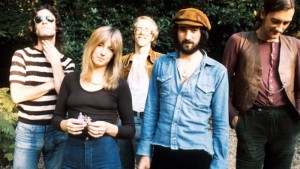 Heroes are Hard to Find wasn’t exactly designed to be a major commercial success. In fact, it didn’t even have a hit single. Despite this, the album was the first Fleetwood Mac piece to crack the Top 40 chart.

But what’s most remarkable about Heroes isn’t it’s chart placement or it’s inexplicable success – it’s the part it plays in the band’s storied history. Released in 1974, it marks the end of yet another era for a band that had already lost one its founder, Peter Green, to mental health problems and another core member, Jeremy Spencer, a few months later.

Welch, who had mediocre success with a few bands during the late 1960s, ushered in an important transition for Fleetwood Mac – away from its marginal success as a blues outfit into major notoriety as a pop/rock group. That started in 1971 but this era of Mac, too, came to an end just three years later.

Internal conflict, much of it related to substance abuse, brought an end to the Welch era in 1974. His last album? Heroes are Hard to Find. And what came next for the band? Oh, only the arrival of Lindsey Buckingham and Stevie Nicks and the No. 1 breakthrough album, Fleetwood Mac, which sold over five million copies and featured some of the band’s most well-known singles. And then 1977’s Rumours, which was an even bigger hit.

Sometimes adaptation hurts, and we can’t imagine how Welch felt when he saw his former bandmates make an international splash.

But if you’re a fan, you gotta thank Welch – and Heroes – for the pivotal role it played in turning Fleetwood Mac into the household name it remains today.

-Alanya has been featuring local bands all week long for her afternoon “Trail Lunch Box,” and so she’ll continue the series with a few vinyl selections from local and regional favorites.

-And then Tommy will wrap up the day – and the week! – with a few spins of the seventh studio release from American indie rock band Spoon, 2010’s Transference.