• In case you missed it, The Moody Blues were (finally) inducted into the Rock and Roll Hall of Fame over the weekend.

Despite being known mostly for their biggest two singles, “Nights in White Satin” and “Tuesday Afternoon,” the band’s biggest contributions to rock over their two decades of commercial relevance were actually a bit more subtle. 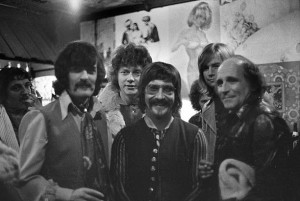 First, a new genre: After struggling to catch an edge in the R&B market, the English band agreed to play guinea pig for new stereophonic recording equipment being developed by their record label, Decca, in 1967. The resulting album, Days of Future, is now commonly accepted as the introduction to the strange blend of psychedelia and orchestration that came to be known as “prog rock”.

Second, groundwork for artist-run labels and distribution deals: Yes, the Beatles had done it before with Apple Records, but the Moodies’ development of Threshold Records in 1969 attempted to one-up the Fab Four’s work by signing and developing new artists and releasing their material via distribution deals with more established major labels. This set a groundwork for artists intellectual property control that would later be adopted by the Rolling Stones and Led Zeppelin.

This week, Craig will open up Vinally Friday with a few spins off the band’s first venture on their newly established label – On the Threshold of a Dream.

And in case that’s still not timely enough for ya, check this: This coming Saturday the band will release a 12-inch vinyl featuring three tracks from their appearance last year at Sony Centre for the Performing Arts – part of this year’s Record Store Day events.

• Alanya will do her best to mark the traditional 4/20 celebration of all things marijuana with a few spins of The Wailers‘ sixth release, Burnin’.

It wasn’t the right to smoke pot but the right to civil freedoms that set the militant, confrontational tone for this record – notably lead-off track “Get Up, Stand Up” and immensely popular, but not-so-subtly violent, “I Shot the Sheriff.”

The “religious militancy” and “anthemic style” of the 1973 release was a marked transition from the band’s earlier peaceful philosophies, according to William Ruhlmann in his review for AllMusic.

“The Wailers are explicit in their call to violence, a complete reversal from their own 1960s ‘Simmer Down’ philosophy,” he writes. “Here, on ‘Burnin’ and Lootin’,’ they take issue with fellow Jamaican Jimmy Cliff’s song of the previous year, ‘Many Rivers to Cross,’ asking impatiently, ‘How many rivers do we have to cross/Before we can talk to the boss?'” 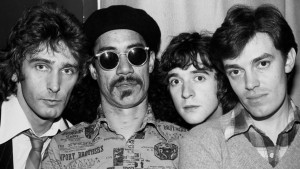 The album is also notable for being the last to feature Bob Marley, Peter Tosh and Bunny Wailer before the latter two set off on their solo careers.

• Robert will don his hat of obscurity with a visit to the finale from 1970s art-rock band, Be-Bop Deluxe.

The album – the band’s fourth – is called Drastic Plastic. It was released in 1978 and, like the Wailers, it marked a new direction and tone. This change, however, wasn’t in lyrical content so much as musical sound – less prog and glam rock, more synth pop and new wave-y – a “charming” and even “romantic” indication of guitarist and band leader Bill Nelson’s “affection for Japan”, according to Steven McDonald’s AllMusic review.

The band would die here except in the memory of a core group of devoted fans, but Nelson would continue on as a solo artist, founding several labels and doing the orchestra scoring thing along the way.

• Tommy will wrap up the day – and prep us for this summer’s Travelers’ Rest Festival – with a few tracks off the Decemberists’ new 11-track effort, I’ll Be Your Girl.

The album just dropped in March – check out the NPR review HERE, and we’ll see you at the fest in August!