It’s true: We lived under a rock for the first decade of the new century.

Call it an excuse, call it a rationalization, a justification – but if you don’t believe us, we’ve got more proof. Until today we had never heard of Sufjan Stevens. 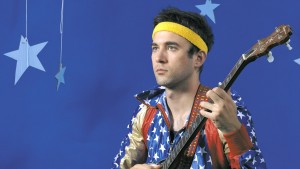 OK, so perhaps he’s not the most mainstream of popular musicians. But when we started our research on what we believed was a totally obscure selection from Tommy for this week’s Vinally Friday program, we imagined this guy couldn’t even POSSIBLY have a Facebook page. Maybe we could get lucky with Myspace …

But boy, were we wrong. Not only does he have a page – a long one, too, we might add – but it turns out the Michigan singer, songwriter and instrumentalist is one of the most celebrated artists of the century so far.

Check out this short list of accomplishments and accolades Stevens received for his fifth  and most popular album, 2005’s Illinoise:
-Best-reviewed album of the year, according to aggregate Metacritic (score of 90/100)

-Named the best album of the decade by Paste

-Inclusion on “best of the decade” lists by NPR and Rolling Stone.

-Winner of the 2005 New Pantheon Award

So … why all this hype for this simple album of 22 ridiculously named tracks recorded on an 8-track and a variety of other low-fidelity equipment?

Most praise Stevens’ songwriting skills – and not just the lyrics. The album is notable for its extremely complex orchestrations, with Stevens himself playing most the instruments (strings, brass, reed instruments; Wurlitzer, glockenspiel, accordion; percussion ranging from vibraphone to tambourine to triangle and sleigh bells, etc). 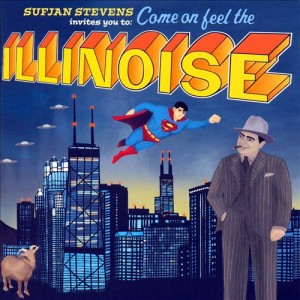 It also helps that it’s a concept album – the second in what was originally supposed to be a 50-piece set of albums concentrating on each of the 50 states. Stevens kicked off The Fifty States Project with Michigan; the second album – which explores the history, cities and themes of Illinois, including John Wayne Gacy – ended up being the last.

So why did Tommy decide to give it a spin? Turns out he saw the guy perform at Sasquatch last year and was blown away.

“Since then he has been such a monumental influence in my life – like a soundtrack,” Tommy said.

-Craig hooked us up with some live Bob Dylan from his 1978 world tour last week, and this week he’ll continue with Side 2 of Live at Budokan.

Recorded over two nights in Japan and released the following year, Budokan is comprised mostly of radical alterations of his adored hits thus far.

-Alanya will follow up with a preview of an upcoming performance from Portland-based Shook Twins. 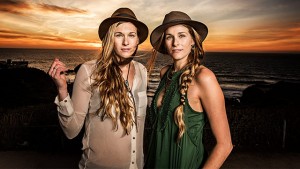 Originally from Sandpoint, Idaho, the folk group is led by twin sisters Katelyn and Laurie and known for their wide range of off-beat harmony and instrumentation (Golden Egg, anyone?).

The group plays The Top Hat on April 27, and Alanya will give us a taste of what they’re all about with a few tracks off their third studio album, 2011’s Window.

-Finally, Robert will play his favorite songs from Chris Issak‘s eponymous 1986 album, which really seems to be quite unremarkable aside from that.

The album was the second studio release for the American crooner known for his 1950s rock and roll sound; it also marked his transformation from rockabilly to sophisticated R&Ber.