The multi-platinum double album, which dropped in October of 1977, still marks the band’s highest-charting in the US and some of the English orchestral rockers’ most beloved singles: “Sweet Talkin’ Woman,” “Mr. Blue Sky”, among others. 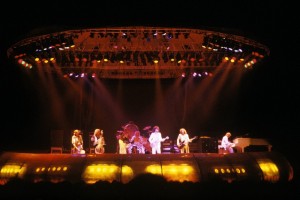 Perhaps more significantly, the album preceded what would become the highest-grossing concert tour to date – a full-on 92-date production that featured the band playing from inside a space ship, with a full orchestra, lasers and fog machines galore!

Electric Light Orchestra has been mostly dormant in the past decade or so, but the band’s mastermind, Jeff Lynne, performed a set of ELO classics at Wembley Stadium this past summer. Last month, Lynne announced the performance will be released as a new live album and concert film, “Wembley or Bust” on Nov. 17.

Tommy will mark the anniversary and the revival on Vinally Friday this week with a few spins of his favorite tracks from Out of the Blue.

For more on the album and it’s making, check out this retrospective from UltimateClassicRock.com.

•Craig will open the day with the No. 10 greatest selling album of all-time, the untitled Led Zeppelin album known alternately as “IV” and “Zoso.”

Released this month in 1971, the album was recorded between tea breaks and garden treks in a remote Victorian estate in East Hampshire, England. It features many of the band’s most well known songs – “Stairway to Heaven” chief among them.

•Alanya will follow-up with one of the biggest surprise debuts of the past two years, The Record Company‘s Give It Back to You.