• Craig will kick off the day with the most celebrated solo release from an American rock and jazz drummer most known for his work backing Jimi Hendrix.

Buddy Miles has a pair of solo releases to his name when he dropped what would become his masterpiece, Them Changes, in 1970. But he was by no means a neophyte, having spent much of the previous half-decade recording with the likes of Electric Flag, the Buddy Miles 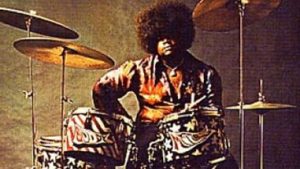 Express and, perhaps most significantly, the Band of Gypsys.

Miles drummed for Hendrix both on stage and in the studio for several years until the guitarist died in 1970.

Them Changes marked a turning point of sorts: The Hendrix era was over, but Miles had two-plus decades of work to go, appearing on more than 70 albums and recording with the likes of Stevie Wonder, David Bowie, Barry White and George Clinton.

The album – called one of the “great lost treasures of soul inspired rock music” by AllMusic’s Steve Kurutz – reached No. 8 on the jazz albums chart, No. 35 on the Billboard 200 and No. 14 on the R&B chart.

• You’ve likely never heard of it, but it’s likely one of of the more celebrated albums of the last couple years.

It’s called Capacity, it’s the sophomore released by indie rockers Big Thief, and Alanya will do us all a favor with a few spins of her favorite cuts from the album this week.

The 11-track effort – a follow-up to the Brooklyn four-piece’s studio debut, Masterpiece, just one year prior – was named the top album of the year by NPR’s Bob Boilen in his annual list. Boilen extolled Capacity for its innovation and for its “touching, poetic and thoughtful tales of memories” and story-songs.

Capacity was edged out only by Kendrick Lamar in SPIN’s list of the top albums of 2017.