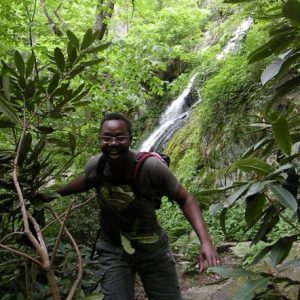 Mandela celebrates the 300th episode of her weekly adventure radio series, The Trail Less Traveled, with the story of an Apartheid survivor of South Africa.

Floyd Khumalo was born and raised in the township of Soweto, just outside Johannesburg, and had a front-row seat to the struggles that defined the region for more than four decades.

Until it was formally abolished in 1991, Apartheid – the system of institutionalized segregation and discrimination legitimized and enforced by a minority white government – ruled the lives of Khumalo and the rest of his brothers and sisters in South Africa.

This week, Khumalo shares his story on that as well as the language, music, culture, food and history that shapes his homeland.

Don’t miss the Trail Less Traveled – Sundays at 6 pm on the Trail 103.3 and online at traillesstraveled.net!