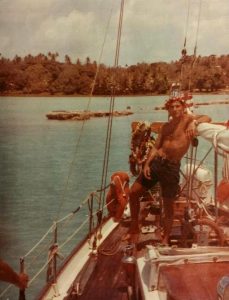 Last week we introduced you to the REAL most interesting man in the world.

His name is Georges di Giorgia, and from the day of his birth during a car crash in France to his treks across Antarctica – even his romantic encounters with some of the world’s most famous actors and actresses – he has been living out the adventure’s quest on a day-by-day basis.

This week, Mandela explores Georges time on the high seas – where he spent 30 years sailing the oceans first as navigator on the ship Mischief for famous English explorer H.W. Tillman and later hunting for the lost treasure of Sir Francis Drake on Robinson Crusoe Island.

That, plus the fortunate time in 1960 when his life was spared by a massive tsunami while boating just off the Chliean coast.

Join Mandela for the second of her two-part series on Georges di Giorgia – tune in to the Trail Less Traveled, 6 pm Sunday on the Trail 103.3 and online at traillesstraveled.net.