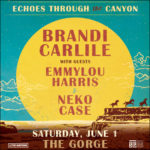 He’s almost as prolific with his political and social activism as he is with recording. We’re talking about Willie Nelson, who seems to have alien-level energy and time on his hands – enough to drop two full-length albums this year (his, get this, 67th and 68th) as well as throw his tattered old guitar into […]

Local favorites Rotgut Whines are celebrating the release of their sophomore effort with a new single and a big album-release party. The new track is called “Sinking Ship,” the album (due Friday) is titled Over Dead Man’s Things, and the big throw-down happens Saturday night at The Top Hat. We’re excited to kick off this […]

It’s a bold man to take over the mic for Stone Temple Pilots. After both longtime singer Scott Weiland and his replacement, former Linkin Park frontman Chester Bennington, died in recent years, we wouldn’t blame you for thinking the gig is a bit cursed. But perhaps we’ve got it wrong. Maybe it’s the band that’s […]