The founder of the Seattle band’s legendary fan club, Ten Club, is one of several prominent guest speakers and panelists who will present at the inaugural Montana Music Summit on the UM campus next month. 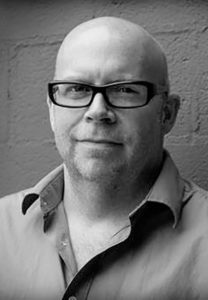 Granted we were very, very young, but we remember Tim from his days co-managing what was our favorite hangout – Rockin’ Rudy’s. Perhaps it was that we envied his job: Overlooking the retail and management responsibilities, all we saw was that was surrounded by CDs and tapes all day!

Perhaps it was his distinct goatee, dyed a neon red? And then there was that time we recognized him on stage with his old band, Shangri-La Speedway, when they opened for Pearl Jam at the Adam’s Center in 1995.

Either way, one day we realized Tim was no longer working there. And we had no idea where he went until a few years later we saw him listed as director of the Ten Club. Holy …

In any case, we’re super excited to welcome Tim back to town for a presentation on the -it-yourself ethos, marketing and success in the music industry as well as a conversation on the band’s history.

For a preview, check out this recent interview with Bierman. And then be sure to pick up your tickets now for the Oct. 12-13 event!

MMS: How did you go from a University of Montana alum to co-owner of Rockin’ Rudy’s to general manager of the Ten Club?

TB: Right around graduation time, I was working at Rudy’s. My parents said they would give me $1,000. It was a toss-up between spending it on a trip to Europe or investing in Rudy’s which was transitioning from a rental shop to a retail shop. So I made the investment and dedicated my post-college life to music! After 15 years or so of slinging records in Missoula, I decided I was ready to take the next step in music retail. I applied to be a buyer at the new Amoeba Records on Haight Street. Cool job, but I was ill-equipped for San Francisco. Luckily Jeff Ament asked me if I could lend my music retail experience to Pearl Jam’s fledgling Fan Club operation. I was happy to get back to the Northwest and into a job that had so much promise.

MMS: Who came up with the concept of recording all of Pearl Jam’s concerts and selling the recordings?

TB: Honestly, the fans came up with the concept. They created the market. We just reacted to it.

MMS: When a band is starting out and there are a million things needing their focus, what’s the biggest thing you think they should pay attention to?

MMS: What do you think is the single most significant thing the band does to keep their community active and growing?

TB: The band doesn’t try to do too much. They understand that making music, playing shows and making cool merch is what they’re good at. And they focus on that and the fans feel it.