If it seems like it’s been decades since a ska band made any waves in the world of mainstream radio, that’s because it has.

Sure there’s lots of ska bands you HAVEN’T heard of, or whom don’t play the kind of stuff that typically cracks the Billboard charts. But there was a time, believe it or not, when ska was all the rage. And it was well over two decades ago.

Reel Big Fish. The Mighty Mighty Bosstones. Rancid. Ah, yes, the mid-1990s – when horns and combat boots defrocked grunge as the “next cool thing.” And like its forebearer, it quickly slipped away in the nether. 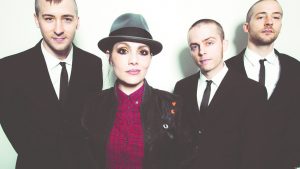 So when we learned this week’s New Tracks on the Trail included a ska hit – one from a female-fronted band, no less – we quite delighted to say the least. In fact, the single from LA-based The Interrupters marks the first time a female-fronted ska band has an alternative radio hit since the days of No Doubt.

Comprised of brothers Jesse, Justin and Kevin Bivona, and fronted by Aimee Interrupter, The Interrupters have been going at it with the support of Rancid frontman Tim Armstrong since grouping up back in 2009. They’ve toured with Dirty Heads, Sugar Ray and Bad Religion- with plenty of festival stops along the way – but after two moderately successful studio albums they’ve finally hit pay dirt with Fight the Good Fight.

With the help of lead-off single “She’s Kerosene,” the Armstrong-produced album peaked at #7 on Billboard‘s Heatseekers chart. And now it’s made it’s way to the Trail.

“(The Interrupters) have long been your favorite punk veteran’s best kept secret, and finally, years of friendship and collaboration with thel ikes of Billie Joe Armstrong, Mark Hoppus, and Travis Barker are bringing them a sliver of the spotlight,” writes the magazine’s Chris Payne.

Check out the full profile and interview HERE and then tune in all day Tuesday for The Interrupters’ debut on the Trail!

• New Orleans-based jam band Galactic is one of about a half-dozen acts set to perform at Trombone Shorty’s Voodoo Threauxdown next week at the KettleHouse Amphitheater, and so we’ll preview the show with the band’s new single. 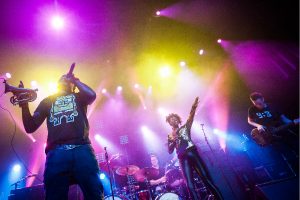 Galactic has teased the follow-up to 2015’s Into the Deep for several months now, so we imagine this will be the first of a series of releases as that project comes to fruition.

Not that he’s been inactive: The singer/songwriter scored the film “Orange Sunshine” and released a handful of EPs in between projects, and he’s set for a fall tour with Tennis starting Sept. 12 in Austin.

The follow-up to last year’s Grammy Award-winning Pure Comedy, the new album is FJM’s fourth studio release. It was released in June and has drawn the singer/songwriter some pretty lofty comparisons – including to 1970s-era John Lennon.

• If it seems like it’s been too long since we heard anything from Philip Phillips, there’s a perfectly good – albeit sad – reason why: The 2011 American Idol winner was prevented from releasing any new material for four years while embroiled in a legal tango with his former record label. 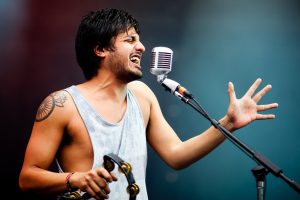 Conflict apparently resolved, the singer finally dropped his third album, Collateral, in January with the help of producer Ryan Hadlock (The Lumineers, Foo Fighters) and is currently touring the U.S. with Gavin DeGraw.

Read more about the legal battle and the new album HERE.

• And finally,  Young the Giant has previewed its fourth full-length album with a new single and will soon take their case to live audiences across the country.

The California five-piece’s new album, Mirror Master, marks their first release since 2016’s Home of the Strange. The 12-track effort is set for release Oct. 12 by Elektra Records.

There ya have it – another Tuesday, another batch of New Tracks on the Trail! Thanks as always to Rockin’ Rudy’s for sponsoring this weekly segment…