The new Suburbs is described as “having inviting aromas of pear and fruit punch” with a “nutty malt profile” and “touches of pie crust and graham cracker.”

We’re talking about the punk bands’ namesake beer, not its new album. We haven’t heard that one yet – so how could we possibly provide such a flavorful description? 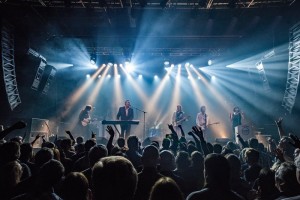 However Hey Muse! smells – or sounds – it’s just nice to see the ’80s-era crew still going strong after all these years, and we’re stoked to feature their latest single in this week’s batch of New Tracks on the Trail.

Hey Muse! marks the Minneapolis legends’ second album since coming back from a 27-year hiatus in 2013.

Founders Chan Poling and Hugo Klaers are now joined by guitarist Jeremy Ylvisker for new material described by NPR as “still tethered to the underground sounds that shaped it in the ’80s … (but) darker, more refined and more pop-oriented than ever”.

Tune in for your chance to hear it. Oh, and about that beer – more on that HERE.

-The perpetual recording/touring machine known as the Chris Robinson Brotherhood is back with its third full-length in two years’ time.

The self-produced Barefoot in the Head – CRB’s fifth studio effort since forming in 2011 – is due July 21st on Silver Arrow Records.

-The guitar virtuoso Kenny Wayne Shepherd launched his career when he was just 16 years old.

Twenty-four years later, he’s lost the kitsch but gained even better licks and wisdom. You can hear a little of both with a track from his eight studio album, Lay It On Down.

Due August 4th, the album was recorded with his longtime backing band in Shepherd’s hometown of Shreveport, Louisiana, and was recorded live to analog tape.

Check out Shepherd’s rendition of Voodoo Chili from the Experience Hendrix tour earlier this year:

No kidding – he’s just released his 25th studio album and second in three years, and critics agree it’s among his best work yet.

NME described A Kind Revolution as “a textbook study in growing old gracefully.”

Check out the full review HERE.

We don’t know much about it beyond that, except that it will feature the single “Revolution” – last year’s collaboration with Swedish sisters First Aid Kid.

There ya have it – another Tuesday, another round of New Tracks on the Trail! Thanks, as always, to Rockin’ Rudy’s for sponsoring!