Local favorites Rotgut Whines are celebrating the release of their sophomore effort with a new single and a big album-release party.

The new track is called “Sinking Ship,” the album (due Friday) is titled Over Dead Man’s Things, and the big throw-down happens Saturday night at The Top Hat. 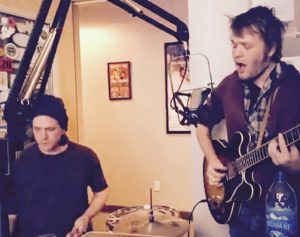 We’re excited to kick off this week’s New Tracks on the Trail with music from a band we’ve enjoyed having in the studio several times over the past year or two.

A bit of background: Rotgut Whines is Evan Manuel and Andrew Murphy, two former (and perhaps current?) roommates who specialize in what they call “Fingerpickin’ Soul and Roll.”

The new record marks their first release since last year’s EP, I Made All this Plague For You. Still, the highlight of their 2017 might have been their appearance on the big stage at River City Roots Festival in August.

You can find the new single on pretty much all the digital streaming platforms; in the meantime, make sure you get to Saturday’s free celebration early – it’s sure to get packed in there.

• American singer/songwriter Ike Reilly returns with his seventh album of solo release, a punk/folk/blues mashup that’s gaining less acclaim for its sound than it is the stories contained within.

For example, the former Ike Reilly Assassination frontman once worked the doors at a posh downtown Chicago hotel, where he was stiffed by Donald Trump after carrying his and his former wife’s bags to their room. 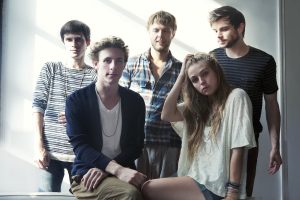 Read more on that and the other unique inspirations to Reilly’s new Crooked Love HERE.

The album officially drops May 18th.

The track is called “Collide,” it was produced by Grammy Award winner Dave Cobb (of Chris Stapleton and Sturgill Simpson fame), and it is apparently a prelude to an EP the band is preparing for summer release.

GIVERS began performing together in 2005 during displacement from Hurricane Katrina; the new single is their first formal release since their second studio album, New Kingdom, dropped in 2015.

• Cut worms are a moth larvae that share a lot in common with vampires – except when darkness falls it’s not the blood of your friends and family they seek, it’s the juices of your favorite plants.

Cut Worms is the moniker of Brooklyn-based musician Max Clark, who shares little in common with vampires and is instead celebrating the release of his debut album.

Hollow Ground, which dropped on Friday, is a collection of 1960s-era pop ballads notable for its “deliberately granular” production quality – “as if they were recorded on thrifted equipment,” describes Pitchfork contributor Olivia Horn in her review.

• Finally, a new song from what’s turning out to be one of the most impressive efforts of the year.

We’re talking about Brandi Carlile, who’s been serenading the Trail 103.3 for months now with”The Joker” off her sixth studio release, By The Way, I Forgive You.

By the way, the album is already the Washington-born folk, rock and Americana stalwart’s highest charting album ever, reaching No. 5 on the Billboard 200. Check out the NPR review HERE.

Carlile is keeping the energy flowing with a new single, also produced by Dave Cobb but with help from Shooter Jennings.