The last time we remember an English rock band making a “left turn” was 20 years ago next month.

The band was Radiohead, the album was OK Computer, and whether you’re a fan or not you have to agree the project – which won the Grammy Award for “Best Alternative Music Album” – anticipated a major shift in experimental rock, the ripple effects of which are still playing out today.

So count us among the delighted when we’re hearing absolute bemusement over the newest Arctic Monkeys release. 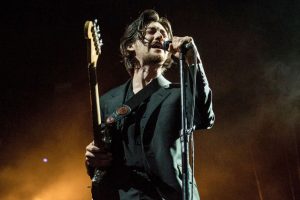 Like its forebearer, Tranquility Base Hotel & Casino – the Monkeys’ sixth – explores a far-out, far-reaching concept in musical form: A futuristic moon colony. It also strays from the guitar-based, verse/chorus/verse lineup of the band’s previous releases. Wanna see what we mean? Check out this performance on The Late Late Show with James Corden last Monday.

“The results of this experiment will divide, delight, bemuse, and bewilder various factions of their sizable fan base, particularly disciples of its bluesy predecessor,” wrote Jazz Monroe in his review for Pitchfork. “No singles teed up Tranquility Base Hotel & Casino, and for good reason: Barely anything here invites casual consumption. There is plenty that actively resists it, and that’s probably the point.”

Tomorrow on New Tracks on the Trail, the first of what we expect will be many fresh cuts from Tranquility Base Hotel & Casino.

• American folk-rock band Dawes is also celebrating the release of their sixth full-length, Passwords, which is set for release June 22.

The most interesting pre-release news on this one comes from the production side: The LA band reunited with Jonathan Wilson, who produced their first two albums, and recorded all the tracks live with the goal of emulating the energy of their stage shows.

“Part of the DNA of Dawes was shaped by Jonathan, much like your first serious girlfriend dictates how you approach relationships for the rest of your life,” Taylor said in the band’s presser announcing Passwords. “Those first two Dawes records have a certain essence to them. We were figuring out who we were. When it came time to produce our sixth album, why not go back to the guy who started it all with us?” 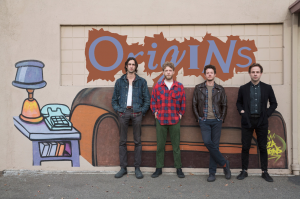 The four-piece will tour this summer with Electric Lights Orchestra.

• We’ve enjoyed the “new” sound of cynicism on “Severed”, the first single from The Decemberists‘ new digs, I’ll Be Your Girl, since we first started spinning it back in January.

Now another single from the Portland-based indie rock band, which will support the album – their eighth – with a two-night stop in Missoula for the second rendition of Travlers’ Rest Festival this August.

While you’re gearing up for the fest, check out this great feature profile on the band’s lead singer/songwriter (and former Missoulian) Colin Meloy and his farm.

• He won’t necessarily appear at that festival, but he will perform at Big Sky Brewing Company Amphitheater in August.

• We gave you “Clean Blood Blues” on May 8, and then followed that up with “Long Dreadful Time” last Tuesday. Now Ike Reilly will make his third consecutive appearance on New Tracks on the Trail with yet another from Crooked Love.

The album, his seventh, just dropped this past Friday. Check out a breakdown and interview with Reilly HERE.

• Finally, we’ll wrap up the day with another track from Missoula musician David Boone‘s upcoming album, A Bubble to Burst.

Last week we gave you “Work in Progress” and re-introduced you to Boone’s musical and personal saga.

That one and this one are among a handful Boone pre-released while putting the finishing touches on the full-length. A release date has not yet been set.