• Kate Bush is taking a look back at her illustrious career with a series of “super deluxe” box sets featuring remasters spanning the entirety of her 23-year recording career.

Remastered is being released in two parts. The first, which dropped Nov. 16, extends from Bush’s pair of 1978’s albums, The Kick Inside and Lionheart to 1993’s The Red Shoes, is eight discs; the second, due Nov. 30, is 11 discs deep and includes her three most recent albums – 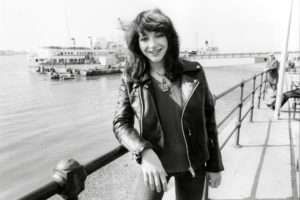 Aerial, Director’s Cut and 50 Words for Snow – as well as 2016’s live album, Before the Dawn, and a plethora of unreleased tracks, covers and bonus material.

We’ll feature a remastered track from the latter half of the pre-holiday collection.

Bush, who is also set to release a book of hand-curated lyrics in December, was the first female recording artist to have a record shoot straight to No. 1 on the British albums charts. That was her third LP, 1980’s Never For Ever; it marked the beginning of a trend towards acceptance of experimentation among female artists – an acceptance many recording artists seem to take for granted in today’s pop-oriented market, writes The Economist’s D.B:

“Like David Bowie before her, (Bush) took a fascination with literature, theatre, dance and the avant-garde into the mainstream,” D.B. writes. “She traded in the unusual from the beginning, and only became more radical as she went on.”

Check out that full profile and analysis HERE.

• Speaking of the holidays, our favorite Texas-based alt-country quintet is back with a new album just a year after cracking the Trail with their previous one.

The difference this time around is the Old 97’s have strictly gone Santa.

Love the Holidays marks thethe band’s 13th studio release and comes on the heels of 2017’s Graveyard Whistling, which featured one of our 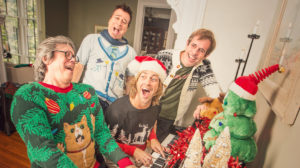 favorite singles of the year: “Good with God.”

• We couldn’t find much info on The Blessing Business, so we’ll just call this next entry a surprise.

The LA-based band – a four-piece, apparently, of “friends and brothers” – dropped their seven-track LP Surrender in July. So what if we’re four months late – you haven’t heard it yet, right? That make it new to you …

• We’ll also feature the newest single from another band relatively unknown to the Trail.

The Washington, D.C.-based Foreign Air is prepping for its first full-length release, but in the meantime it’s giving us a bit of tease with its first single, Used to You.

The electropop due first broke through with their debut single “Free Animal” in 2014; they have since released a pair of EPs.

Boy Pablo broke through with his YouTube single, “Everytime” in 2017. He’s since released a pair of EP’s, the latest being Soy Pablo, which is seven tracks and dropped in October.

“Featuring upbeat and energetic indie pop with melodramatic lyrics, Soy Pablo will leave you feeling the desire to dance away the pain of unrequited love and general angst,” writes one critic.

For a full feature on the man – the boy? – and his music, check out this NME profile.