Long before Billy Corgan cornered the market on superfluous melancholy-rock …

… there was Australian trio Crowded House and its 1986 smash single, “Don’t Dream It’s Over.”

Perhaps it’s not fair to allow one song to usurp an entire band’s sound and career – but honestly, we’re so obsessed with this one that we’re just going to settle with not being fair.

Defeatist and hopeful at the same time (with music and lyrics that seem to both gain and lose focus over its not-quite-four-minute playing time), “Don’t Dream It’s Over” sticks in the space between a relationship’s inevitable demise and the romantic notion of “love conquers all” – in that sticky gap between pragmatism and idealism. 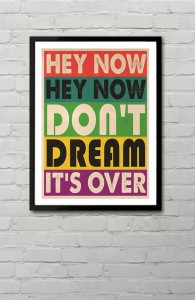 But wait – maybe it’s not about romance at all?

It seems several artists have catapulted on this idea – that the subtle meandering between hope and defeat in “Don’t Dream It’s Over” could also be ascribed instead to the communal relationship built among “the people” in response to an outside enemy.

Miley Cyrus and Ariana Grande recorded a remarkable cover of “Don’t Dream It’s Over” earlier this year as a statement/response to the terrorist attacks at Grande’s concert in Manchester.

But they’re hardly the first.

Stereogum compiled its favorite covers of the song as part of their “Gotcha Covered” series over the summer: Richard Thompson, Faith No More – even the Red Hot Chili Peppers did a live take in 2013.

But the song’s Wikipedia page has an even more extensive list: Paul Young, Sixpence None the Richer, Diana Krall – even the cast of Glee felt inspired.

And now, The Head and the Heart has joined the party. Hey now!

Despite a relentless touring schedule this year – including a stopover in Missoula for the inaugural Travelers’ Rest Festival in August -the Seattle folk-rock group found time to lay down their rendition of the epic Crowded House.

Last week the group released their version of “Don’t Dream It’s Over” as a stand-alone single, and tomorrow we’ll throw it onto rotation as part of this week’s New Tracks on the Trail segment. 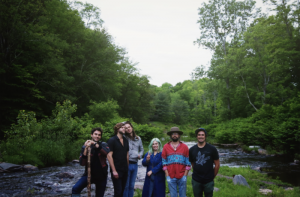 While you’re waiting, we invite you to delve deeper into the full glorious-ness of the original 1986 version with a American Songwriter’s critique of its lyrics and song structure.

The Head and the Heart will wrap up their tour at the end of next month at the Voodoo Music and Arts Experience in New Orleans.

• We broke into the “charming” upcoming Courtney Barnett and Kurt Vile collaboration earlier in September with the introduction of its first single, “Over Everything” into our rotation.

Now we’ll unveil the next one off Lotta Sea Lice: “Continental Breakfast”.

Check out the video for the new track – and check out the reference to another famous rock couple that shares the same name. The be sure to pick up the album of (mostly) originals on Oct. 13.

• It’s now been 19 months since The Lumineers dropped their sophomore album, Cleopatra, but still the hits keep rolling off.

The latest single from the Denver stomp-rock crew is the album opener, “Sleep On the Floor.”

Along with the title track and single “Angela,” this new one completes the band’s music video trilogy.

The Lumineers are one of several artists involved in a Spotify project to recreate iconic Vietnam-era songs in conjunction with the release of Ken Burns’ and Lynn Nocick’s new documentary about the war.

Their cover of Bob Dylan’s “Subterranean Homesick Blues” was the first in a series of releases planned through October. 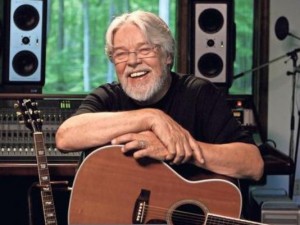 • Bob Seger is rumored to be close to turning the page on live performances, but it’s clear he’s not giving up on creating music in the studio.

Last week the Detroit rock legend announced his 18th studio album with the release of a new single, a cover of Lou Reed’s 1989 track, “I Knew You When.”

The track is the only one Seger has released from the new album, I Knew You When, which is set for release Nov. 17.

If you don’t mind driving a couple hours, you can catch Seger live Nov. 13 in Billings.

• And finally, new music from the R&B master Aaron Livingston, aka Son Little.

The former producer from Philly – who won a Grammy Award for his work on Mavis Staples’ “See That My Grave is Kept Clean” – released his second full-length album, New Magic, Sept. 15 on the Anti- label.

“If you’re familiar with Little’s work with the Roots, Mumford & Sons and Kelis, among others, it’s time to try his new material, in which the fight for the soul draws strength from everyday blessings,” wrote Beverly Bryan in her review for Paste.