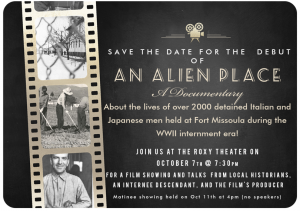 The Historic Museum of Fort Missoula brings our community a glimpse into the past with the debut of, “An Alien Place: A Documentary”.  The documentary seeks to shed light on the imprisonment of over 2000 Italian and Japanese men held at Fort Missoula during the WWII Internment era at the Fort Missoula Detention Camp between 1941-1944.
During World War II, Fort Missoula was turned over to the Department of Justice, Immigration and Naturalization Service and established as an Alien Detention Camp (ADC). Between 1941 and 1944, the ADC held 1,000 Japanese resident aliens, 1,200 non‐military Italian men, 23 German resident aliens, and 123 Latin and South American Japanese.

There will be two opportunities to see this great documentary at the Roxy Theatre:

A public viewing on October 7th at 7:30pm with guest speakers including local historians, an internee’s descendant, and the film’s producer.

A Sunday matinee showing at 4:00pm. (No speakers will be at the matinee.)

Tickets are $5.00 each and kids under 14 get in free! All proceeds go to the Friends of the Historical Museum at Fort Missoula who support Museum exhibits, educational programs, and building restoration.

This project is possible through support from:
The Greater Montana Foundation;
National Park Service; Japanese American Confinement Sites grant program;
Montana Office of Tourism Infrastructure Investment program;
The Friends of the Historical Museum at Fort Missoula; and,
Supporters like YOU

Please do not hesitate to contact Jessie Rogers (406-728-3476 Ext #5) or developmentdirector@montana.com  if you have any questions.

One option for resolve numerous medical problems is a on line. Minor change in basic lifestyle, another is medicine.