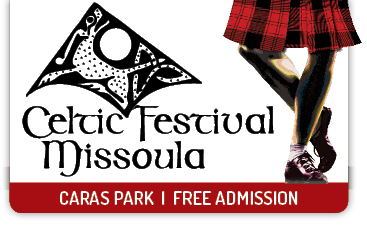 President of Celtic Festival Missoula, Shannon Lukes, says the once postponed event can now go forward thanks in large part to sponsorship by Bob Ward’s Sports and Outdoors. “We had planned to hold off on this year’s festival after a major sponsor pulled out.

Bob Ward’s heard about this and called me out of the blue, and asked what it would take to get the Festival going this year.”

After a meeting between Lukes and the President of Bob Ward’s, Chad Ward, the two agreed Bob Ward’s would become the presenting sponsor of the seventh annual event.

Chad Ward matched Lukes’ excitement, “Bob Ward’s is heading into our 100th anniversary this year and we were looking for the best ways to give back to a community that has supported us so much over a full century. When the opportunity to revive and be a part of this amazing event popped up we jumped at the chance.”

This year’s Celtic Festival Missoula will be held on Saturday, July 29 in Caras Park. The event will feature Missoula’s favorite Celtic rock band, and Festival veterans, The Young Dubliners. “The Young Dubliners have been with us since the first festival so they’re a tradition.  Watch for other great bands to be announced. Screaming Orphans are slated for 2018!!

For more information about the Celtic Festival contact Shannon Lukes at Shannon rslukes@msn.com or via phone at 406.239.0105.

Bob Ward’s is Montana’s oldest and largest sporting goods retailer with stores in Missoula, Butte, Helena, Hamilton and Bozeman, and online at www.bobwards.com

Bob Ward’s continues to be owned and operated by the Ward family and is celebrating 100 years in business in 2017.

For more information about Bob Ward’s contact Ryan Corwin, Bob Ward’s Advertising Manager at rcorwin@bobwards.com or via phone at 406.728.3220.