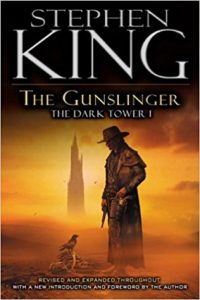 Described by King as his “magnum opus,” this is the story of the haunted gunslinger known as Roland, his pursuit of the sinister “man in black” and his quest to protect the Dark Tower.

“The Gunslinger” was initially published in 1982 as a mash-up of five previous King short stories; it was revised and re-released in 2003 and got renewed attention with the release of King’s “The Dark Tower” film in 2017. Read more about the development of the story – both in novel and film form – from Rolling Stone Magazine film critic Noel Murray HERE.

Normally priced at 10 dollars, “The Gunslinger” is on special markdown for just 3 dollars through the month of June at The Book Exchange.

The Book Exchange, voted Missoula’s best used or new bookstore for 22 straight years. In the Tremper’s Shopping Center across from the fairgrounds.