We take it for granted now, but there was a time when the concept of computer-assisted music was downright revolutionary.

Sure, sampling had been around for years; but there was something uniquely inspiring about the synthesizer, and none more so than the Fairlight CMI.

Nicknamed the “mother” of all samplers, the Fairlight was an expensive piece of digital equipment – a keyboard, a processor and a monitor that moved at the pace of a glacier. But for Kate Bush in 1985, it did exactly what it needed to do. 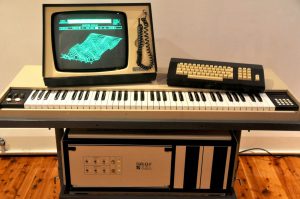 Facing the threat of obscurity after her previous album The Dreaming, failed to attract commercial success, Bush retreated to her family farm, where she built her own studio and took her time crafting something entirely otherworldly.

Yes, she had used a Fairlight before – in fact, she pioneered its use on her 1980 album, Never for Ever. But for the new one, Hounds of Love, it became the centerpiece.

The risk paid off, and Bush again found herself at the top of the charts – the first of four album singles, “Running Up That Hill,” becoming her biggest hit and the album selling more than a million copies.

Thirty-three years later, Hounds remains among the most respected works by a female artist. In fact, just this month NPR ranked it No. 4 on their list of the 150 greatest albums made by women – one of five Bush collections to make the list.

This week, Robert will take us back to a time when the Fairlight was the most innovative thing since the Beatles with a few spins of his favorite tracks – don’t miss Hounds of Love tomorrow afternoon on Vinally Friday!

• Craig will kick off a three-week exploration of the Nitty Gritty Dirt Band‘s first compilation album, Dirt, Silver and Gold.

Released in 1976, the three-record piece featured all the country rock band’s biggest hits stretching back to their foundation in 1966 – notably “Buy for Me the Rain,” “Battle of New Orleans,” “Will the Circle Be Unbroken” and their classic cover of the Jerry Jeff Walker hit, “Mr. Bojangles.”

“If anyone is wondering about the Dirt Band pre-1976, this excellent collection is where they should begin,” reviewed AllMusic’s James Chrispell.

Craig will feature Discs 2 and 3 in the weeks ahead. 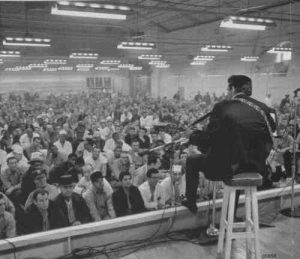 This one, too, is a timely pick – the band, including founding members John McEuen and Les Thompson, was just announced as a headliner at AMERICANAFEST in Nashville later this summer.

• Alanya will follow up with another country-rock classic, Johnny Cash‘s At Folsom Prison.

Recorded and released in 1968, At Folsom Prison was what it said it was – a collection of songs performed by the Man in Black before the inmates at the California state institution.

It wasn’t Cash’s first time playing before inmates (he had been doing so since 1957) nor was it the introduction to his famous single, “Folsom Prison Blues” (that one actually came in 1955) – but the energetic, raw combination of the two was just enough to turn around his lackluster mid-1960s experience and make Cash and his family a household name.

For more on the historical performance – and album – check out this NPR retrospective in celebration of its 50th anniversary last January.

• Tommy will stick with the country-rock theme with a few spins of the second studio album by Nashville recording artist Rayland Baxter.

The Trail gave Imaginary Man some love back when it was released in 2015 – particularly the single, “Yellow Eyes.”

But now is as good a time as any to dip back into its country grooves – the folks at Big Sky Brewing Company announced this week that he will share the stage with Shakey Graves at a performance on Saturday, August. 25th. Tommy will celebrate that with a ticket giveaway during his show!

For added intrigue, you might be excited to learn that Baxter’s father, Bucky, was the longtime slide guitarist for none other than Bob Dylan.